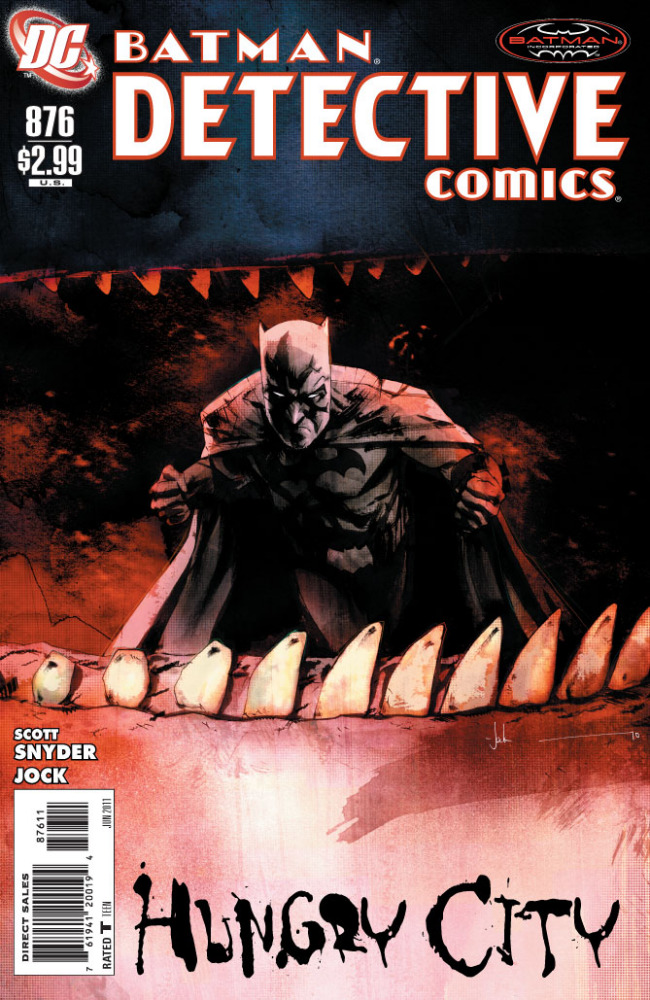 Detective Comics #876 follows Dick Grayson as he looks into the murder of the assistant to one Sonia Branch — daughter of Anthony “Fats” Zucco and finds that there’s more to it than it seems.

Month to month, I’ve steadily enjoyed Detective ever since Scott Snyder took over, and this month is no exception. Part of it’s been his interesting take on Dick as he wears the cowl and how the city changes because of this, and some of it’s been thanks to the great artists who have worked the book with him.

I’ll start with talking about the plot. With this being the first part of “Hungry City” and all, not a whole lot happens in the issue, but Snyder writes Dick and Gordon really well so you won’t be uninterested in it. It gets off to quite an interesting start involving a large whale, and makes you want to keep reading it.Â  The ending’s kind of the typical cliffhanger that makes you want to come back to see what happens, but honestly, if you’re not planning on picking up #877 by the end, there’s something wrong with you.

Next up, I’ll talk about the art for a minute. Jock knows his way around the bat-universe by now, and this issue he really shows that. His pencils are fantastic, and he does some really unique panels and bleeds them together in interesting ways. The inks and colours are perfectly suited to his work as well. Oh, and the cover, man is it awesome. Covers are supposed to get people interested enough to buy the book right? Well, if this cover doesn’t do that, no cover can.

New Read Accessibility Rating: 9 This month’s Detective is the start of a new story, and doesn’t rely on the previous two storylines at all. In fact, the only time they’re even mentioned is just at passing glance when Jim asks Dick a favor, so if you haven’t been reading the book, it’s a great jumping on point (and if you’re not reading it, get on it!).