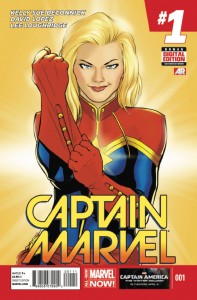 It’s Marvel NOW time, so that means another new #1 issue! This month we have Captain Marvel #1, helmed once again by outstanding writer Kelly Sue DeConnick. Following the recent release of Ms. Marvel featuring young Kamala Khan, can Captain Marvel differentiate itself enough to justify this solo title? For Carol’s sake, I sure hope so.

Captain Marvel starts off much in the same fashion as the new Wolverine #1 did. We see our hero in the midst of a mission in a strange place, with a strange group of people that appear to be a new team and we’re thrust into the action with zero explanation of what’s going on or who these people are. It’s becoming a common mechanic for Marvel books lately, to start an issue at the end an end it with the beginning. I blame Rick Remender and Jonathan Hickman for pulling this style of storytelling off so well.

Our story transitions to Carol Danvers chasing a rogue object with James “Iron Patriot” Rhodes, only to find it contains a young alien inside. The castaway turns out to be a displaced refugee from the Infinity war. This was kind of nice to see a reference from the already forgotten “universe changing” mini-series, since Inhumanity steamrolled right over it. This leads to Carol encountering Iron Man who subtly suggests that with the recent traumatic events in her life (power loss, brain lesion, Infinity) that maybe she should head up an space-based Avengers post, that would team up with the Guardians of the Galaxy an report interstellar intel back to Earth. It would also be an opportunity for her to get some alone time and do some soul searching out in the empty black of the ‘verse. We cut to a scene of Carol and Rhodey sneaking out of a birthday party to make out. This totally caught me off guard, so either I missed something in all the post-Infinity fallout or this was yanked out of midair. I’m old so it’s entirely possible I just forgot this little tidbit. However abruptly it started, it was just as quickly slammed on the brakes, as Carol tells Rhodey that she thinks she needs some time away in space, a year in fact, and the issue ends with Captain Marvel ready to take flight to the next stage in her super hero career.

I’ve always liked DeConnick’s take on Danvers. She’s one of the most powerful heroes in the Marvel U yet she’s lost, on a constant search for who she is and what her place in the galaxy should be. She’s a work in progress, yet a strong woman and one that always tries to do the right thing and defend those who need it. And to top if off, she seems like a pretty cool chick, someone you’d like to have a beer with. She’s an everyman, er, woman and makes for a character that both men and women can easily relate too.

Lopez’s art is a mixed bag for me. This isn’t the first time I’ve seen his work on Captain Marvel, and I’ve never been especially impressed by it. It’s not that his work is bad or unskilled, it’s just not impressive or memorable either. It reminds of the kind of work you see in the Sunday comic strips. It’s very flat and lacks depth or a sense of motion, but it’s serviceable enough to tell the story and the characters are expressive. Loughridge’s colors are much the same, it’s a simple palate and neither hurts nor pushes the art past it’s current state.

Carol Danvers has always been one of my all time favorite characters. If you could see my Ms. Marvel original art collection you’d find this to be true. I root for a Captain Marvel series every time Marvel offers me one, and I’m happy to say this book seems to be off to another solid start. DeConnick’s take on the character is fresh and compelling and I appreciate the strength she continues to lend to Danvers’ tale. Personally I’d prefer an artist that complements the writing a bit more but I’m more than happy just having the book in my hands. Let’s just hope that this book can find its legs before Marvel’s next big fancy initiative ushers in (yet) another relaunch.

Score: 4 (out of 7) Lovely young Kit has inspired me take up sewing, so I can make my own daughter a pair of epic Captain Marvel jammies. And maybe a pair for myself too.