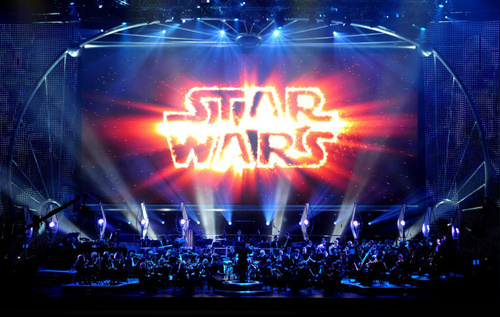 Star Wars Live is nothing less than epic.

What do you look for in a good score? Is it memorable and catchy music or something that simply enhances what’s in front of you?

There’s a lot that goes into the memorable scores in video game, movie, and television. The instruments, musical genre, and intent have to be carefully considered before implementation or the response it elicits may not be the right one. To that end, a musical score plays an important role in both echoing and enhancing the intended tone of a piece of media. It can certainly help if they are catchy as well, but the impact of the score is dependant on the media it’s paired with.

A great example of this is Star Wars. John Williams and the London Symphony Orchestra won an Academy Award for their work on the soundtrack and it’s easy to understand why. Where the audience would be subjected to foreign worlds and alien beings, Lucas felt that the film would require a strong score to provide a sense of emotional familiarity. In that vein, the score strikes a high as soon as the film begins. There is a sense of pure epicness immediately after seeing the words, “a long time ago, in a galaxy far, far away.” The Empire is only seen as being so daunting because the score accompanying their first appearance is incredibly imposing. When Luke’s aunt and uncle are found dead, the score echoes his uncertainty as he looks to Tatooine’s sunsets. Finally, after the destruction of the Death Star, the score presence an added level of triumph before the credits role. Sure, Star Wars is a great movie in its own right, but I doubt it would be as easy to consume or resonate with had the score not been so finely tuned.

The same phenomenon occurs in video games. The Final Fantasy series is widely popular, but it’s not like the success of the franchise is a coincidence; production values are high and a big part of the polish relates to musical score. Nobuo Uematsu is known throughout the video game industry for his work on the franchise because of how distinctive it is and its use in-game. It’s not as though the man just creates a soundtrack that is shoehorned into a game; every piece is supposed to convey either the personality of a character or the gravity of the situation. There are numerous references to this approach to in-game music, but my favourite exist in Final Fantasy VI. Not only does every central character have their own distinct audio track, perfectly encapsulating their personalities, but the 16-bit scenarios only bear depth because we are essentially told, through music, how to feel.

Television would be horribly boring without the proper music. Sitcoms require music to fill gaps in between dialogue, Soap Operas need music to enhance drama, and Science Fiction programs use normative music to juxtapose odd visuals.

Regardless of the medium, musical score is important. That said, a great score is only as good as its use.