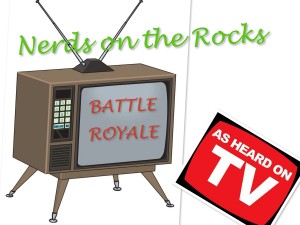 For those of you who are new to Battle Royale each week we post two songs that go head to head trying to get your votes and emerge as the champion! This month we are focusing on TV Show Theme Songs! The Fight Schedule is as follows!
Week 1: Fresh Prince of Bel-Air Theme VS. The Muppet Show Theme Song
Week 2: Mission Impossible Theme Song VS. Batman (Adam West) Theme Song
Week 3: Fresh Prince of Bel-Air VS. Mission Impossible
Week 4: The Muppet Show VS. Batman (Adam West)!

WOW You all shocked me again! Fresh Price Losing to Mission Impossible! Wow I can not believe Fresh Prince could not win at all!

Welcome to the Championship Round! Tonight we have a battle of two opponents, that have nothing in common other then they each won their first fight! This battle will be interesting!

The Champion:
Yes Batman is always the Champion! One of the most recognizable superheroes to todays entertainment world! He has the strength and following to walk away with a blow out victory this week! Can the Dark Knight be stopped? Its up to you to help him get the extra edge to victory!

The Challenger
This is very different, but still has something that can help take down the batman! The Muppets hold a special childhood memory in many hearts! WIll this be enough to this classic theme song to take down the dark knight? The Muppets have made a comeback in recent years so anything is possible! Can they do it?

So there you have it! The Battle of the month! The one we have been waiting for! A Championship fight to the end! Who do you think is better? Vote for your favorite theme song! Batman vs The Muppets!

Be sure to tune in next month as we get ready for valentines day, with some of the best love song, doing the opposite of love by fighting for your votes!