We say farewell in “Book of Death: The Fall of X-O Manowar”. Meanwhile, “The Steam Man” delivers steam-powered knuckle sandwiches to beings from beyond the stars  – all in this week’s reviews from Dark Horse and Valiant Comics. 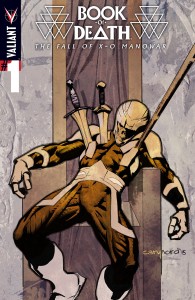 Book of Death: The Fall of X-O Manowar #1

With the Book of Death miniseries coming to a close next week, today we get the final character profile from the ominously titled tome which reveals the fate of Valiant’s Visigoth king/intergalactic hero. We open in an undetermined future on a father and son checking out X-O’s museum while a familiar foe sneaks in to do some grave robbing. With that frame story set, we flashback to the Nebraskan Visigoth kingdom where we find a geriatric Aric, an older-yet-still-regal Queen Sanaa, and (introducing!) the inheritor of the Manowar armor.

Despite the suitably dark Cary Nord cover, the tone of this tale rings true to the ultimately optimistic spirit of Venditti’s interpretation of X-O Manowar. Clayton Henry’s art (which vigilant Valiant readers may recognize from his stints on “Ivar, Time Walker” and the jam-packed X-O wedding issue) contributes to this feeling with clean line work, perfect for Dalhouse’s daylight color palette. While characters like the Eternal Warrior may be more righteous, X-O feels the most like a straight-up superhero and that plays out in this send-off. This was the Book of Death title I anticipated the most and while part of me wanted to see the gruesome demise of my favorite Valiant hero, I appreciated the torch being passed as the title’s main themes were carried over. 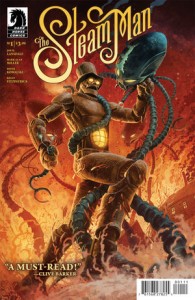 It’s 1895 and strange beings from the sky are causing trouble. William Beadle does the sensible thing and engineers a giant metal man to open a can of whoop ass on these invaders but the hole in the sky they left brings something much worse.

I was about to write off this steampunk “Pacific Rim” on premise alone until I was hooked in the opening pages by the jovial crew cracking dirty jokes inside their steel Abraham Lincoln-looking 19th century mecha. There’s so much going on here that it shouldn’t work but Kowalski’s art helps sell the madness in this most mish-mashed of mash-ups. “War of the Worlds” comes to Nacogdoches to get a Texas-sized beating in his Weird West story, while the crew has a proto-Ghostbusters, “bro-in’ out” vibe that’s really appealing. Humor and sci-fi horror are a tricky combination but Lansdale and Miller get the ingredients just right – a solid debut for this spooky time of year.