The Talos Principle isn’t exactly a new game, given the fact that it was released on PC last December, but now it has found it’s way onto the Playstation 4. So of course it is time to check in what has changed and what I think of it. The first noticeable thing is that the game has the subtitle “Deluxe Edition” that’s because you don’t just get the base game, you also get the expansion “Road to Gehenna.”  So if you have not played Talos before you get everything right away, which is nice, but more on that later.

It has been an interesting experience playing The Talos Principle right after SOMA. Thematically both games ended up being surprisingly similar. You play as a roboter that gets thrown into a seemingly virtual world. Then a disembodied voice, calling himself Ellohim, starts talking to you and suggests you explore the world you are in and solve it’s puzzles. But don’t you dare go up that high tower! Similarities to religious themes are of course absolutely intentional. The three worlds you visit are not completely empty though. Of course there are the puzzle rooms, but quite often you also find computer terminals. These are the real meat of how the game tells it’s story. In them you can find records of humans in form from e-mails, chat logs and all kinds of different texts. Sometimes you even get to chat with someone. All the writing in these computers is very well done, and that is also where the similarities to SOMA come into play. A lot of it centers around what it means to be human and what the life we are living is all about. One of my favorite encounters on one of these machines was a test which asked me multiple choice questions about why I think I am, and why I am different from an animal. At the end it even questioned my answers logic and I have to admit that it totally made me think about the dilemma I was confronted with. That is not something games achieve often and Talos Principle definitely needs to be applauded for it. 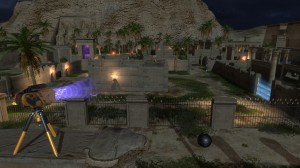 The main part of the game is the puzzle solving. It would be easy here to compare it to Portal, but they go a slightly different route with this game. The puzzles in Talos are slightly less traversal focused and depend more on the clever use of the gadgets the particular puzzle room provides you with. Getting to the Tetris piece at the end of these starts of easy. You just have to use a blocking device to disable a force field or turret. Maybe you have to redirect a laser through some windows so you can activate a specific device. It does get really complicated later though, when you have to use all the stuff that got introduced over the game and then even have to record holograms of yourself doing one thing, while you yourself do something else at the same time. The puzzle designs in this game are just incredibly smart and easily more difficult than anything any of the Portal games ever had. And if that wasn’t enough the game even has a lot of side content. A lot of the worlds have a star hidden in them somewhere, which gets you other Tetris pieces, which then let you enter secret rooms with even more devious puzzles. The crazy thing about reaching the stars is, that often they require you to set up things in puzzle rooms that have nothing to do with the room itself. You are basically solving a puzzle involving multiple rooms and the hub world. It’s sometimes hard to believe this game was made by the same guys who also made the Serious Sam games. 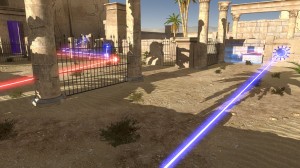 The PS4 port itself is well done. It looks like the PC game and for the most part also runs well. It’s a bit of a shame, that you can notice some frame drops in some of the bigger environments. It’s nothing that really spoils the fun though. Because this port also includes the expansion you have a ton of content to play through. Solving all the puzzles and finding all the secrets will probably easily take you 30-40 hours. Some more words on the expansions though, it is hard. They basically just start of where the main game ends and keep going. These extra puzzles are just real brain burners. They also do some very clever things with the computer terminals in the expansion, like for example playing an actual text adventure on them.

Review 6 (out of 7): The Talos Principle is a piece of incredibly smart design, coupled with some of the smartest writing I have encountered in games. You get a lot to play with this version, it’s just a shame about the performance issues to an otherwise great package. For some the structure and story might be a bit dry, but I was captivated.