We’re just two weeks away from the start of e3, and the official revealing for Nintendo’s next home console. As we did last week, we shall take a trip in the not so distant past as we take a look at the reveal of the Nintendo Revolution/Nintendo Wii. Unlike the GameCube’s reveal, the Wii’s reveal was a bit more staggered.

If you skip around to the 4:30 mark, you can see Iwata talking about gamers wanting a revolution before pulling out the console design for what at the time was called the Nintendo Revolution. As you can see in the video, the system was showcased in black but there were red, green and a white version shown as well.

The final design stayed pretty true to the console they showed off at e3 2005. There were some features that never made it, including the internal attachment to allow users to play DVDs and other content. Others like the ability to expand the memory via SD card came long after the console’s release.

One promise that they may have succeeded on even if not in the manner intended was Iwata’s proclamation that “You will say Wow” when you see the graphics. And I’m sure a LOT of people said wow, but not because it was impressive. 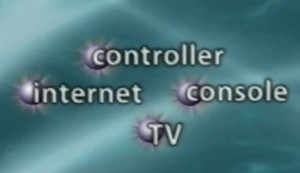 Part of Iwata’s presentation also detailed a vague message about the relationship between the controller, the console and the television. And the impending importance of online to them (a promise, they followed up on, but pretty poorly)

He is pretty vague on the controller, but does suggest it will offer an experience that gamers had never seen before. And to that promise, he delivered in spades, but we’ll get there soon enough!

Another promise he makes is the nature of Wi-Fi/online for the Revolution. He notes that Nintendo has several of their key franchises ready to hop online, and hopes to have one or two of them ready to go for launch. He finally notes that he was pushing development to have Smash Bros be one of those games.

On point one, it was a bust, the only Nintendo franchises to really hop online this generation were Mario Kart, Super Smash Bros Brawl and Animal Crossing (yes there were other games, but aren’t exactly in the same league). Of those games, only Mario Kart had a half-way decent netcode and lobby system. As a whole for a feature talked about a year and a half before launch, it really seemed to have been half-baked.

On the 2nd point, no Nintendo launch title was online-capable. Actually, the first Nintendo online title didn’t come from almost a year after the console’s launch, and even then was done by a 3rd party studio working with Nintendo.

Then he goes on to discuss the games or projects in the works for the Nintendo Revolution. He speaks about Miyamoto challenging his team to come up with something brand new that would launch alongside the system. They delivered with Wii Sports. It was something brand new, something never done before and it launched with the system. The quality of the game is up to the audience, but no one can deny its impact on the generation.

Moving on, he notes that next generation versions of Super Mario and Zelda games are in the works. Well, we all know the Super Mario Galaxy games turned out to be masterful video games (And on a personal level, the best games of the generation to me!), but Zelda is an iffy one. While the Wii did launch with a Zelda game, it was simply a port of the Gamecube’s Twilight Princess, and 5 years later we’re still waiting for the Wii’s original Zelda to launch.

Finally, we are shown a video of Samus in what would turn out to be Metroid Prime 3. I have no qualms with it. The game turned out fantastic, and not that it was difficult, but looked a lot like the tech reel they showed briefly.

His attention then turns to 2nd and 3rd party developers. At this point, I’m not even sure who Nintendo’s 2nd party studios are so I won’t make any comments about that. He does note that he believe developers in both the east and the west would embrace the Nintendo Revolution due to Nintendo’s new vision. That hasn’t exactly played out how they had hoped, though they did garner impressive success.

Moving on, Iwata mentions that SquareEnix is already hard at work on an exclusive Wi-Fi enabled version of Final Fantasy: The Crystal Chronicles. If memory serves me correct, The Crystal Bearer has no online mode, and the only other game was Echoes of Time, which was just a DS game being emulated on the Wii. I’m going to say that Square-Enix failed on this promise.

Say what you will about corporate speak and buzzwords, but when it comes to the future of the industry, Iwata has awesome insight. Part of his speech focuses on the next generation (current gen now), and how development costs would start to skyrocket to 8 digits, and how developers would begin to struggle in this era. He offers them an easier, more streamlined approach to developing on the Revolution. I don’t develop games so there’s no way I can tell you if it is factual correct or not, but his other worries have been playing out for the past 6 years.

His final point is to reveal the Virtual Console for the Revolution, which would allow them to share Nintendo, Super Nintendo and Nintendo 64 online via a store. The service worked as intended even if the updates dried up around year 3 or 4. Still there’s over 300 retro games available on the service so can’t complain.

This actually turned out to be longer than I expected so shall cut it short here, and continue next time with TGS and e3 2006!