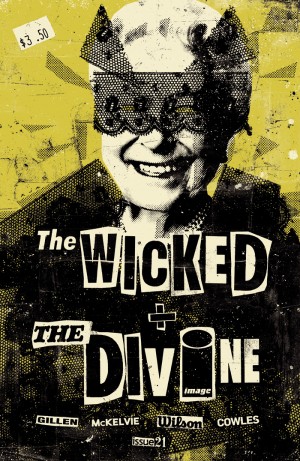 WicDiv #21 is garish, explosive, and the polar opposite of the last arc, “Commercial Suicide”, which was super character driven and focused on individual members of the Pantheon. In this issue, writer Kieron Gillen, artist Jamie McKelvie, and colorist/explosion master throw the young gods of WicDiv into not so glorious and pretty emotional battle as once and for all, Ananke reveals that her plan is to “salvage” what she can of the Pantheon by sacrificing its youngest member, Minerva. Even if this issue is more Dragon Ball Z style mega brawls (Albeit with much cooler characters whose dialogue doesn’t sound like they downed twelve NOS energy drinks at a sleepover.) than music industry parallels, you can definitely see a little bit of the predatorial film/music/general entertainment execs who use the struggles and tragedies of the talent they “shepherd” to make mega profits. (See Janis Joplin, Jim Morrison, Kurt Cobain, Amy Winehouse etc.) This is mirrored in Ananke as she only wants the Pantheon members to comply to her will and doesn’t mind breaking the usual rule of letting them live for two years as gods to get her way.

But with the help of McKelvie’s art, Wilson’s colors, and well-placed one-liners from Gillen, they are quite non-compliant and even breathe new life into the double page spread as Dionysus turns his considerable powers from creating the world’s ultimate dance floor to a non-stop attack on the Valkyries, who are Woden and Ananke’s goons. In this spread, McKelvie draws Persephone and her friends in statuesque superhero-like poses while energy of all colors of the rainbow wreaks havoc. When Wilson punches up his colors in WicDiv #21, it usually means destruction like his hot yellows when Baphomet battles the Valkryies with his sword, or Dionysus pulls out a glow stick (or jump rope) to help his friends defeat the woman, who gave them their divine powers and now wants to sacrifice the youngest, most innocent of their number. 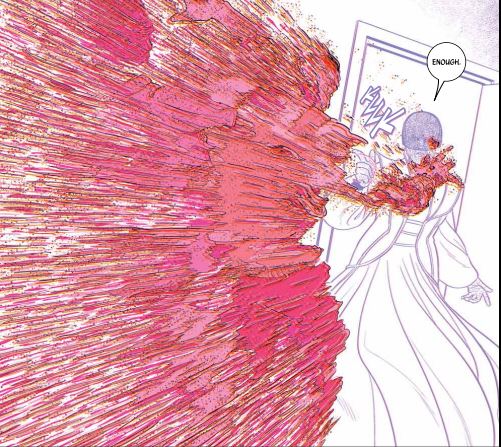 McKelvie is known for drawing beautiful, youthful characters from Phonogram to the recent CHVRCHES music video he helped animate, but he can do ugly and traumatic as well. The best example of this is when Ananke (Like she did to Persephone earlier.) kills Minerva’s parents in front of her. The page is all gore and speed lines, and the only colors in Wilson’s palettes are red. Everything is blurred together as McKelvie captures this shocking moment and almost immediately cuts to Ananke threatening the kind, yet naive goddess Amaterasu with the fingers that give her the power over life death to show that she feels nothing about their deaths. It’s all necessity, which is what Ananke means in Greek. This scene also plays a main role in the plot as Gillen snaps us out of our Civil War-esque revelry of fans picking which gods they want to win in a battle completely controlled by a manipulative youth murderer, shows how terrifying Ananke has become, and how messed up it is that Baal and Woden still support her thanks to lies on lies on lies or just plain cowardice. Woden is beyond pathetic in WicDiv #21, and Gillen and McKelvie spoof Voltron (or Pacific Rim) to show how spineless and ridiculous he is. 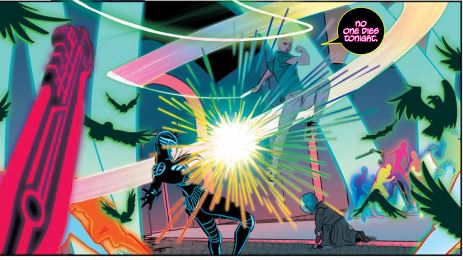 Like most of the issues of “Rising Action”, WicDiv #21 is filled with over the top action (Ananke basically turns into  Siege era Sentry towards the end of the comic.)  that stems from the character relationships that Kieron Gillen and Jamie McKelvie have so meticulously crafted the past two years. The fights aren’t just fireworks, energy bursts, and shots of glistening muscles (These things are cool though.), but reveal parts of the Pantheon members’ complex and ever developing personalities. We see Dionysus add “fighter” to his character profile as he fights to save Minerva, and Persephone sinks deeper into darkness and vengefulness as she gets  some fierce facial expressions and lines of dialogue about killing. And even in the midst of killing, Gillen and McKelvie find time for humor with a nice callback joke for one of the Pantheon members.

WicDiv #21 features intense colors from Matthew Wilson, epic and tragic art from Jamie McKelvie, and Kieron Gillen continues to explore theme of youthful energy exploited by the old and power hungry while taking the overall plot to a dangerous place for our favorite gods and goddesses in a deafening crescendo that is William Blake meets Daft Punk.