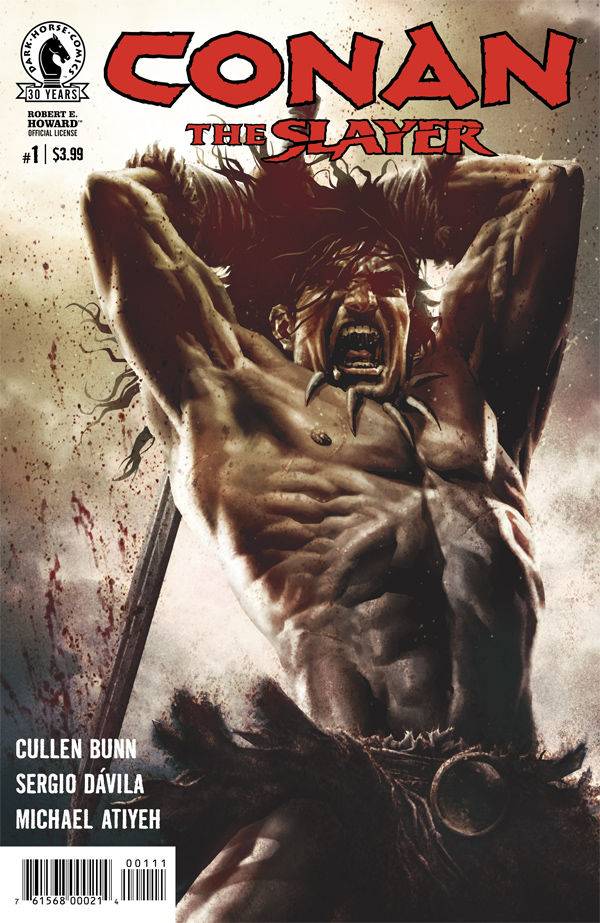 Set after his pirate days, way before his king days, and between warlording gigs, Conan the Slayer #1 has plenty of the bloody thrills that fans of the Robert E. Howard character have come to expect for the past 84 years. However, writer Cullen Bunn (Uncanny X-Men) and artist Sergio Davila (Red Sonja) also show a vulnerable side of the fierce warrior as the story opens up with Conan on the run in the deserts pursued by Turanian outriders, who are going to be the antagonists in the series. All his men are dead, there are vultures circling, and it looks like this is the barbarian’s last stand. But it’s not as Conan is introduced to a whole new cast of characters, who aren’t super memorable, except for Oksana, a mysterious female bodyguard and Mykylo, a mustachioed leader of a group of riders, who is revealed to be quite the badass by the final page.

However, what sets apart Conan the Slayer #1 from some other Conan stories and comics is the added psychological dimension that Cullen Bunn brings to the table. Conan isn’t just a one dimensional bloodthirsty barbarian, but he also feels guilt and has PTSD after getting his entire raiding party killed by the Turanians. Bunn uses the typical purple prose narration common to Conan stories, but it’s really Davila and Michael Atiyeh’s painting style art that drives the emotions home, especially in a double page spread that completely takes place in Conan’s head with tattered banners, broken helmets, and plenty of gloomy greys. Conan is traditionally a character who doesn’t have that much of an interior life so this is a nice touch that connects you with him beyond “This guy is so cool. Look at him swing his sword with blood flying everywhere.”

A good adjective to describe Sergio Davila’s art is sturdy. His faces might have the emotional range of the teaspoon (Which is unfortunate because Bunn’s Conan is pretty damn vulnerable.), but his characters ripple with muscles and energy while Michael Atiyeh punctuates each killing, beheading, or maiming with scarlet red that really stands out in the drab brown desert landscape. There’s a real outlaw feel to the setting of Conan the Slayer #1 as everyone is nomadic and fighting to survive instead of trying to conquer realms or unleash demons. It’s like a frontier era Western draped in sword and sorcery garb.

The family drama angle of the Dothraki-like riders that capture and later team up with Conan isn’t super interesting, but Cullen Bunn and Sergio Davila give Conan himself an excellent emotional arc in Conan the Slayer #1 as he must overcome his guilt and learn to become a leader of men (and women) again after getting his raiding band slaughter with the help of Mykylo, who is basically Ron Perlman in the Hyborian Age. Toss in some nice hand to hand combat, and it’s a pretty exciting comic for any fantasy fan. Conan has great abs too.