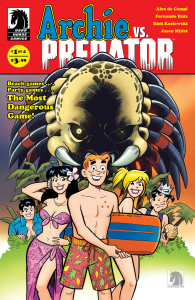 They don’t seem to happen as often as in the past, but I still love them. Of course i am talking about the crossover. Personally the dumber it is the better, so of course I wanted to check out Archie vs. Predator or AvP as we are going to call it from now on. (Mostly because it makes me forget about that other AvP…)

It’s Spring Break time, Archie and the rest of the gang don’t know what they are going to do. Luckily, Jughead wins a trip to an tropical island by finding a ticket in a bag of chips. They go to said island and a bunch of teenage drama ensues. To be honest the issue feels really conventional for the most part. Most of it centers around them having to finish up the year book while being on the island, so they decide to have the “Best Dressed“ contest then and there. The Predator of course lands on the island while they are there but doesn’t factor into the issue at all. We get a couple of heat vision shots here or there (apparently that got updated to display Emoji) and the Predator can be seen in the background in some of the panels. Our protagonists have no clue that he is there and that doesn’t change by the end of the first issue. I was actually wondering when anything was going to happen, but near the end they leave the readers on quite bloody scene.

So while the writing of Alex de Campi didn’t exactly blow my socks off here, I was impressed by the art of Fernando Ruiz. He nails the typical Archie style. It’s very cartoony and looks so lively. Then, when he needs to crank up the gore he delivers as well and it is a stark contrast to the rest of the issue. This one moment worked very well, but it also reminds you of the untapped potential this AvP has. That’s basically the feeling I had after finishing this issue, I wish there was more of this. So if anything I kinda still want to see issue #2 in the hopes of them tapping into that. They can very easily make this great, let’s see if they will.