New York Comic Con is an interesting beast especially once the weekend hits proper. But for all the stuffed showfloor, long lines for panels and expensive food, if you look hard enough can usually stumble onto something different. 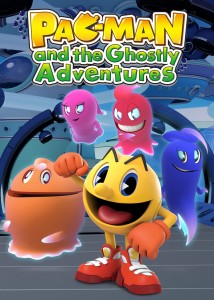 Take for instance Pac-Man and the Ghostly Adventures, a game that wasn’t anywhere near my radar. Partially because I’ve seen the premiere of the show that it influences and it is horrible, and partially because Nintendo does seem to be killing it with platformers this year. But I was passing by the Namco booth because I needed my passport stamped, and the kiosk was free so I figured I’d give it a try. I was left pleasantly surprised.

A lot of people have compared the upcoming Sonic Lost World to the Super Mario Galaxy series. If Sonic is aping Mario then Pac-Man is aping Sonic in his latest adventure. Taking a cue from Sonic’s 3D Adventures, Pac-man comes equipped with a new homing chomp attack, which when used properly allows you to chain jump through enemies and build up a combo. It is an interesting design choice, and one that I found worked extremely well. In some cases even better than Sonic’s lock-on ability.

The main reason being that when targeting an enemy, you have control of the direction Pac-Man will go. So you can chain to get across a jump or chain to try and reach that fruit or puzzle piece that is just out of touch for Pac-Man. This was earlier in the game, and I do see or hope for a ton of clever uses throughout the game.

That isn’t the only element that will be familiar to Sonic fans. Pac-Man is also able to launch himself from cannons (because they always seem to be around in platformers) and some give you control of the direction you want to be fired in, even comes in handy during the boss battle during the demo. 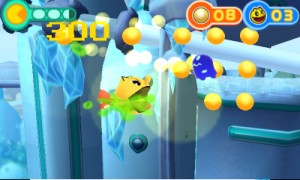 The boss battle also highlight one of the game’s other cool, albeit it a little morbid feature, for larger enemies Pac-Man is able to do more than chomping on them he can kind of chew them up. Yeah for some larger enemies, Pac-Man can’t simply engulf them instead he needs to find a way to stun/down them and then he can begin to chew on them to lower their health and eventually defeat them.

I found the demo to be enjoyable, and a very interesting slice of the game to showcase. If I had to pick one bone with the game it’s Pac-Man’s jumping. He seems to have a weird flutter jump, but doesn’t act like Yoshi’s which gives him a slightly higher vertical instead simply to keep him in the air just a bit more. But it doesn’t seem to be a major dealbreaker just something you need to mentally prepare yourself for.

Pac-Man and the Ghostly Adventures is due within the month, and I think would be worth checking out. Especially if there is a demo!