I went into Detention expecting a modern-day slasher film, and in certain ways the movie delivered on that promise. In most other ways, I’m not quite sure I can call this a slasher or even a horror film. The problem is I don’t know where else it would fit. This is a genre mash-up for the new age, part horror, part slasher, part parody, part comedy, part sci-fi and so many other parts that I dare not ruin for such a windy, twisted road to the climax. 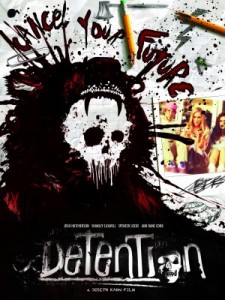 I really don’t want to possible ruin any of the beats in this film because almost everything seems to come out of left-field for better or worse.That said, I can focus on the characters and I guess the new-age high school stereotypes on display.

First, we’re introduced to the pretty and popular head cheerleader, who calls herself a “BITCH” (Beauty, Intelligence, Talent, Charisma and Hobostank) and she gives us a very Zombieland-esque opening sequences with various tips to remaining hot and popular. We’re then introduced to the “high school loser” who never really appears to be anything but unnoticed. She isn’t really regarded as much, but perspective is everything in High school it seems.

The movie does some interesting things with a lot of the relationships and even characters. Some of them are simply marched off into the void while others return to you in the most surprising manner. It has fun playing with the tropes on display while fully embracing them as well. And the cast lead by Josh Hutcherson and Shanley Caswell are pretty likable as well. At least as far as their characters can make you like them. I even found myself enjoying Dane Cook in the film.

I really want to say more, but can’t bring myself to for the fear of ruining this film for others. I will say this much by the end you may be a bit confused, or upset with the film or wondering if you waste your time, but you won’t be bored and you won’t be indifferent. I really do recommend checking it out!