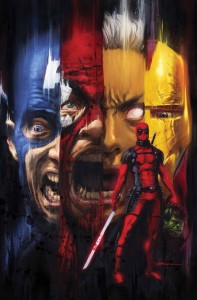 I’ve noted on the podcast before that I’m not a traditional comic fan, I don’t follow characters or artists or writers, I just tend to find things that catch my eye. Or put it another way, shiny covers! So of course when a comic is titled Deadpool Kills the Marvel Universe, it catches my eyes big time. An eye-catching title and a gorgeous cover though only gets me to look at the comic, was it worth the purchase?

Deadpool Kills the Marvel Universe starts off with The Watcher explaining the concept of the Multi-verse in the Marvel Universe. There are infinite universes with infiniteÂ possibilities. He then introduces us to the universe in which this story will take place, and the comic wastes no time getting to the action.

We see Deadpool in the Baxter Building killing the first family of Marvel, The Fantastic Four. Sue Richards is holding her husband, Reed, in her hands as he begins to melt and die. We see that The Thing has been crushed and pounded, he is literally nothing but stones and dust at this point. Deadpool soon makes short work of Johnny and Sue.

The story then jumps backwards to explain what exactly happened to Deadpool to turn him from lovable, but psychotic assassin to just a psychoticÂ assassin. I won’t go into details here, as I think is interesting to watch the situation play out. The story is pretty tight for a first issue. Giving you a lot of action, and showing you that the stakes are high from the first few pages. It even ties in together the opening narration with the plot of the story by the end.

While I think the story is strong, and I do enjoy Deadpool as a character, the art didn’t impress me as much. Granted, overall I think it is a solid book, but some of the faces just seem off. In particular when Deadpool is being escorted into his new residence, one of the characters in the scene just seems like they have a giant bird nose. Yes, a minorÂ quibbleÂ but it was distracting, which is a huge deal in a visual medium. I also feel like Deadpool’s costume comes off as flat at times. Like it lacks the details to really kick it up a notch especially since he is the main character of the book. Finally, ome of the backgrounds just feel a bit stiff to me.

On the flip side, some of the stuff between Deadpool and the Fantastic Four is amazing. There’s the panel where Reed’s condition is worsening forward by the close-up of Sue’s face. The stuff between Sue and Deadpool is also well-illustrated.

Finally, and I wasn’t sure where to put this, but Deadpool is a tough character to write-for. Not just because he has a very unique sense of humor, and his 4th Wall breaking stuff, but you also need to keep track of his “voices.” This book offers up at least 4 different voices for Deadpool and at times it can be overwhelming remembering which part of him is actually talking, but it works out in the end.

New Reader Accessibility: 5– This is the first issue of a mini-series, and it provides all the set-up you need in this book.

Recommendation: Buy It– While I’m not the biggest fan of the art, it does get the job done overall. But it is really carried by a strong script and a fun premise. I am curious to see where the story goes, and if it can continue to reach the highs set up in the first few pages.Â