Review 6 (Out of 7) – If nothing else, Crosswind #1 ends with me wanting more of this comic even if I didn’t complete understood what I just read. 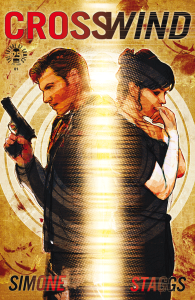 From what I gathered, it is a dueling story that ends on a Freaky Friday-esque twist, but that’s not even the most fascinating aspect of the book. I find the story of Cason, a hitman/enforcer to be interesting. At least with all the players, he is surrounded by and the fact we’re introduced to him murdering one of his childhood friends, but that happens. But find myself more captivated by the story of Juniper. She is a stepmom, who son doesn’t like her. A husband who doesn’t respect her (and apparently is cheating on her). She is the neighborhood hottie who gets harassed simply trying to bring groceries into her home. But all of that seems to pale in comparison to what’s going on inside her head. By the end of the issue, we don’t have a clear picture, but it’s enough to make me want to discover more.

I was less enthused by the art. It isn’t bad, but I think whenever you’re going for a realistic look to art, the things that seem unnatural stand out more. Take for instance the opening sequence with Cason and his friend, their faces are realistic, it shows pain and anguish and frustration. The lines are done well especially with Del and his stringy hair. But I kept looking at the faces and seeing something just a little too real for the snowy backdrop that took me out of the book for seconds at a time.

I know it’s petty to harp on when the book makes such great use of lighting and shadows , but it’s what stood out. But not enough to deter me from the book. So I may track down the rest of the series and give it a read.