Spyral wants the deadly Perdition Pistol back—so they turn to the only man who stands a chance of recovering it: Midnighter! The only problem is who has possession of it now…the near-unbeatable Suicide Squad! 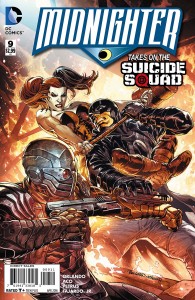 1. The Colors, Duke. The Colors! – I’ve raved about Midnighter’s art before and it continues to be a bright spot in the book. The thing is the visualization of his “super brain” just seems to evolve and morph in such clever ways. His battle with the speedster just crackles with energy and movement without taking up more than a single page. It’s the little pieces that really shine.

2. Quarter Mile at a Time – The centerpiece of this issue is a fight between Midnighter and the newest recruit to the Suicide Squad, Afterthought. Afterthought is able to see 5-seconds into the future which clearly gives him enough time to react to anything thrown his way. It makes for a fascinating fight as Midnighter’s fighting computer seems to have met it’s match. First time, we really see our boy down and out.

3. “I thought your superpower was winning.” It’s one thing to kick someone’s ass, it’s another to insult them while doing it. That line stung!

4. A Hero Isn’t Always a Hero, But Sometimes a Hero – I think the best part of this issue was Midnighter proving, as he often does, that he has a big ole heart no matter how many people he injures or hurts. In this case, it’s putting the safety of Robert, a documentarian who has decided to follow around Midnighter, in front of a fight he wasn’t really winning. Sometimes, it’s the simplest gestures that define a hero.

5. Norm! – My favorite moments for characters aren’t necessarily the moments when they get to showcase their powers or save the day. It’s the time in-between that when they can just be themselves. I mean I’ll never have a fighting brain (I’ve tried!), but I can totally relate to hanging out at a bar with some friends. It’s a quick moment, but it’s nice to touch base with Midnighter’s friends. And nice that they weren’t dicks about what they think of him.

6. The Suicide Squad – The big build-up for this issue was that it was gonna be Midnighter vs the Squad, and I mean the fight happens, but it doesn’t. While he exchanges quick blows with Harley, the majority of the brawl comes down to Midnighter and Afa with Deadshot and Harley mostly looking on. It’s also a very tiny Squad, but I guess they are only going after a single target. At least, the issue ends with a promise of more to come.

7. The God Garden – I’ve been tepid on the idea that has been the backbone of the series to date, and this issue doesn’t really seem to help resolve that. We do get a new piece to the puzzle, but I feel like the concept needs to be more concrete. Right now, it’s either Midnighter dealing with someone who has the tech or trying to retrieve the tech stolen, and very little else.

Review 5 (Out of 7) – A fun issue, but feels more like a set-up to issue 10 than something wonderful.