After breaking up with her boyfriend and resigning from the superhero team, Unity, 19-year-old Faith Herbert (aka Zephyr) moves to Los Angeles to establish her independence. It’s really a simple coming-of-age story of budding romance, puppy-nappers, and a mysterious plot targeting super-powered humans. Okay, life may be anything but simple for Faith, but she takes on all challenges, from a passive-aggressive boss at her Buzzfeed-y day job to gun-toting bad guys, with her optimistic (but never naive) outlook. It’s 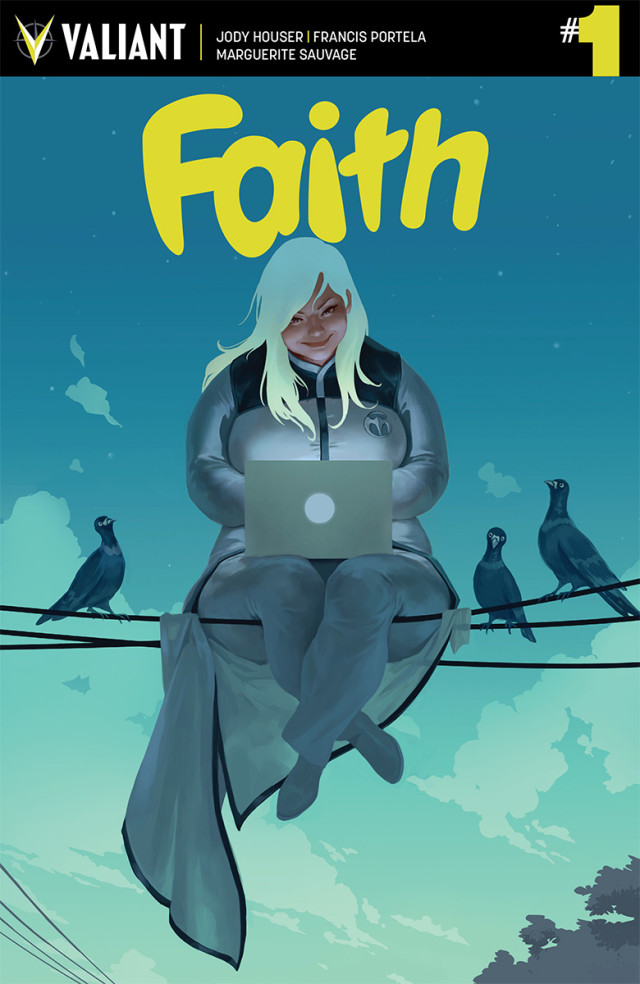 that charm that endeared the character to readers in her original 90’s form and following Valiant’s re-launch back in 2012. Fans have been eager for a solo book and its announcement set off a wave of positive feedback (and some negative, but more on that later).

An avid nerd, Faith lives out her comic book dreams of a dual identity – mild mannered reporter by day and crime fighter by night. However, with print media dying, Faith finds herself doing less hard-hitting journalism and more clickbait-y listicle writing. But it pays the bills and helps Faith keep a low profile, unlike her reality TV-starring ex. While Faith may have some mixed emotions about her former lover/teammate, she doesn’t keep herself from indulging in a few hunk-filled daydreams or a little Skype flirtation with another popular Valiant character.

Issue #1 does a great job establishing her personal life for newcomers and balancing it with the superheroics. After I finished I went back to verify the page count because a lot of ground gets covered at a fairly brisk pace. Hauser, a writer mostly known for her work on the “Orphan Black” tie-in, keeps Faith true to her character while adding a new chapter to her life. And given our heroine’s geeky leanings, genre references abound (“Does anyone even care about superhero movies anymore?”, etc) but feel more like nerdy in-jokes than fourth-wall-destroying comments. As for the art, Sauvage’s work (which you may have seen on a cover or two) really shines in the fantasy sequences. The break in styles is a fun shift and Dalhouse’s crisp coloring (which I immediately recognized from the recently-wrapped “Ivar, Timewalker”) is on point for the light-hearted title.

The book has received a lot of traction online for its message of body positivity and haters being what they are (see Taylor Swift for more details) have struck back in typical anonymous comment form. But despite what some knuckleheads chatter about online (those “people” on 4chan can be quite rude sometimes), fans in the know were sold on Faith from her team book appearances. Where some attempts by the Big Two to be “progressive” can fall flat, “Faith” works because it’s not pandering. She’s a human being first and never feels like a mouth piece. There are quite a few adjectives that come to mind before I think about her weight, but if her atypical body type (compared to other comic book females, that is) brings in new readers more power to the publisher.

Review 6 (out of 7) – a “glass full” entry point for Valiant virgins and a fun inaugural issue with a fan favorite for Valiant veterans. Personal drama, jokes, cheerful art, and superheroics from a gal who wants to be the best superhero around – put your faith in this book.