This week I review The Walking Dead #137 from Image Comics and Amazing Spider-Man #14, Guardians of the Galaxy #24, and Thor #5 from Marvel Comics! 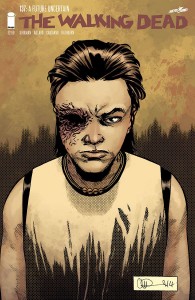 In certain scenes lately, Carl is a spitting image of Negan and I think that may be foreshadowing his future or a possible future for him depending on what choices he makes. Lydia is starting to creep me out I am not fully certain of her intentions with Carl. It seems as though Carl is becoming a real ladies man though. The art is fantastic as always. Robert Kirkman does a great job of giving these characters personal struggles to overcome and not making it all about the walkers. This issue puts Maggie and Carl in some interesting situations. Luckily The Walking Dead double ships next month so I’m sure we will get plenty of answers and revelations. 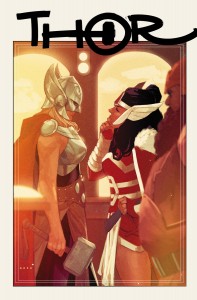 It doesn’t surprise me that pretty much everyone has accepted the new Goddess of Thunder as Thor except for the Odinson’s father, Odin himself. I do like that he cannot figure out who wields the hammer now, nor use any of his power to reveal it. I have my suspicions, but my list of suspects’ looks very similar to the Odinson’s which might be there to mislead us. Jason Aaron is doing a great job keeping me guessing and subtly dropping hints without giving too much away. Even though they are not on the best terms, it was nice to see Odinson and Sif talk over a pint. The guest art by Jorge Molina is refreshing and fits very well with the regular series art by Russell Dauterman. The colors are refreshing and add a depth to the environments throughout the issue.

Guardians of the Galaxy #24 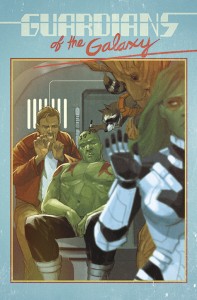 Gamora: The deadliest woman in the Galaxy, but now even more deadly. In this issue we get to see more of what the Black Vortex is capable of and the X-Men and Guardians of the Galaxy debate using it to even the playing field to take on Mister Knife and the Slaughter Lords. I really like the utilization of Thane in this story; I have been waiting to see more of him since Infinity. Also Nova shows up towards the end just in time to get sucked into this crossover. I am glad this crossover is throwing Sam Alexander into the mix, I like what little chemistry he has with both the Guradians and X-Men and would enjoy seeing him become more a part of the Marvel Universe as a whole (his inclusion in Axis was a great start). Bendis certainly doesn’t waste any time moving the story forward with this issue. The artwork was really fun; it is cool to get to see some the transformation that some of the heroes go through when they succumb to the power of the Black Vortex. 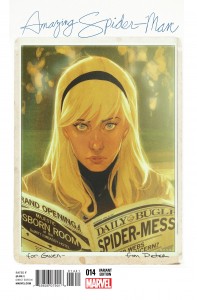 Spider-Verse ends here! Who lives, who dies, who wins, who loses? The Web Warriors take down the Inheritors almost exactly how I thought Peter would plan it once all the players were on the field and the Earth with radiation and that being harmful to the Inheritors was revealed. This issue did leave me with more questions than answers so I look forward to reading the epilogue issue. I am really becoming a fan of Peter and Cindy’s “relationship” and they have a cute moment at the end. I’m just curious the impact this event has on the rest of the spiders, because we got to see how Jessica Drew reacts in this week’s issue of Spider-Woman #4. The artwork was great, although I wish they would have picked one artist to do the whole thing. I think it takes away from the story when the art changes halfway through, especially since in this case the art styles and colors are so different.