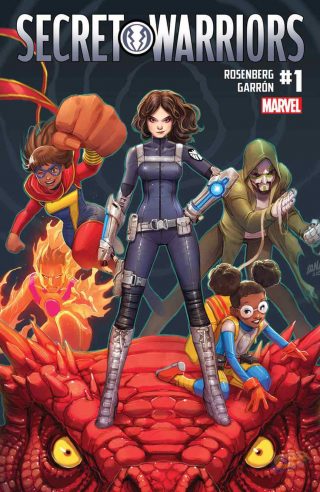 Secret Warriors #1 is truly the superhero comic of the resistance. It’s full of earth shaking action scenes that sometimes look like they’re straight out of a kaiju movie, especially when Ms. Marvel and Devil Dinosaur are involved. However, it’s also a powerful look into the psyche of the Inhuman SHIELD agent Daisy Johnson aka Quake, who Matthew Rosenberg has a real affinity for writing. (She was the subject of his first Marvel project in 2017.) During the talking scenes, Javier Garron’s art is pretty superhero “house style”, but when the action starts up, and Quake, Inferno, and Ms. Marvel use their special powers, it’s pretty explosive. There are also plenty of reds from Israel Silva when they raid an Inhuman prison camp that is masquerading as a HYDRA base. But sometimes his palette is of a subtler variety like when he mutes the blue in Captain America’s costume because apparently he’s a Nazi now.

Rosenberg uses a non-linear plot structure in Secret Warriors #1, and it actually works pretty well. Scenes in the present are more setpiece driven while the flashback scenes add insight to Quake’s character and the demise of the original Secret Warriors from the comic by Jonathan Hickman and Stefano Casselli. They also nail how jarring it is that SHIELD went from a well-trained espionage unit to yet another part of HYDRA led by evil Captain America. Except for the first couple pages where she’s sipping coffee for a second and waiting to meet with Phil Coulson, Quake is constantly going through the wringer and telling HYDRA agents to fuck off while dispatching them with a clap of their hands.

Quake’s definitely in over her head assembling a superhero team as she keeps trying to go solo even though she has a dinosaur, the smartest person in the Marvel Universe, and Kamala freaking Khan as backup. She is used to being an important piece on the chessboard, and not the grandmaster playing the game as she and a ragtag team of teenagers (and Karnak) are the Inhumans’ and perhaps the Marvel Universe’s only hope. The new Secret Warriors team finds success in the first issue against the legions of HYDRA goons thanks to their raw power, but they have yet to face a “name” villain. Hopefully, their chemistry will improve by then.

Another highlight of Secret Warriors #1 is the way that Javier Garron revels in the spectacle of these characters’ superpowers. Like Ms. Marvel and Moon Girl, he’s more of a superhero than a spy artist although he can also pull off shadowy subterfuge with darker colors from Israel Silva. Ms. Marvel’s first appearance is a master class in how to add a new character to superhero team as he and Rosenberg  say, “To hell with narrative captions” and introduce her using her embiggening abilities to pick up and throw away HYDRA agents like the not-so-hot garbage they are. The art definitely takes on a more epic scale when Quake uses her earthquake abilities too.

Secret Warriors #1 is a flashy superpowered action filled  hymn of resistance against fascism from Matthew Rosenberg, Javier Garron, and Israel Silva. And it kicks off a fairly awkward “assembling the team” arc that isn’t your typical “roll-call” issue of Avengers or Justice League.

Overall Rating: 6 (out of 7)– Secret Warriors #1 has blockbuster style art, an interesting team dynamic, and is an antidote for all those damn Nazis in the main Secret Empire books.