Those Canadian space aliens return! After investigating a mysterious disappearance, the Justice League find themselves battling a creature that can change its molecular structure. Whether he’s made of water or wood, the team must take him down before he reaches civilization. Across the galaxy, Hawkman and Lobo engage in their own battle for the safety of Strange’s missing girlfriend. Jeff Lemire and Mike McKone deliver yet another fun book that showcases what we can expect from this title.

After reading the zero issue, I assumed that story was a “flash forward” and we would get a traditional first issue story with this book. That didn’t happen but it’s inconsequential. For whatever reason, this title is starting form it’s zero issue. So we’ll have to wait to find out what happened between Forever Evil and Justice League United #0. It’s a bit nit-picky but still feels weird that we just jumped right into this story.

While some of the team –Green Arrow and Animal Man specifically– stumble about, Star Girl and Martian Manhunter are the heavy hitters in the big battle that engulfed the story. Seeing them work well together brings back good memories of what they endured during Forever Evil. Against a creature that can change its molecular structure and with Green Arrow and Animal Man providing the comic relief, this book remained fun to read. McKone may be incapable of illustrating something without it looking entertaining. A particular gruesome scene in the book looked less so thanks to his art.

It’s thanks to McKone’s art that this title looks like it’ll be a typical DC book, but lighter and more entertaining. As I said before, it’s like the DC equivalent of Marvel’s All-New X-Men. If you’re a fan of that you’ll enjoy Justice League United. If not then this book is still a fun and cool story to dig into. 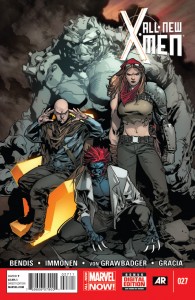 The future strikes back as The Brotherhood of Mutants discovers the New Xavier School. Cyclops and his X-Men struggle to defend themselves they drop off, one by one. Meanwhile, secrets about the origins of the Brotherhood are finally revealed. Brian Michael Bendis is on fire with this new story that continues where Battle of the Atom concluded.

Probably goes without saying that I really enjoyed this book. I was excited about the final page in All-New X-Men #26 and Bendis definitely delivered. The future Brotherhood of Mutants are good foils to the X-Men of the past. They’re much more powerful but Cyclops and his own X-Men are more than capable of making up the difference. Still, they were all caught off guard and it shows as their school’s defenses completely crumble. You’ll have to read the book to find out how the Brotherhood discovered the location of their school. It’s one of three big revelations delivered by Bendis.

Together with Justice League United, this week had two amazing, fun books hit the shelves. All-New one-ups the excitement by bringing back great characters introduced in the equally amazing Batte of the Atom. Everyone needs to be reading this! If you haven’t started, read Battle of the Atom, All-New X-Men #26 and then this book to catch up. Spectacular things are on the horizon.