The return of the Wrecking Crew! Wait, they’re the Frightful Four now! This issue picks up right where we left off last issue with Johnny and Ben being ambushed by The Wizard, Wrecker, Thunderball, and Bulldozer. The Wizard reveals to Reed that the team has received enhancements and they are working for a mysterious benefactor. Can Ben, Reed, Sue, and a powerless Johnny take on this upgraded incarnation of the Frightful Four with a little help from the She-Hulk, Ms. Thing, and Ant-Man? 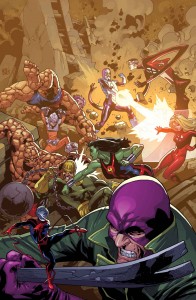 powerless at times in our lives but Johnny had his power taken away from him. It is a huge part of who he is and now he’s learning to live without it. Like he says in the issue, he feels helpless. He’s out of his element and it is interesting to see this character broken down to see what really makes him a hero. The rest of the team still values him, but he is having a hard time seeing his importance to the group. I really liked that Johnny narrated the issue because it’s not very often that we get to read Johnny like that.

James Robinson and Leonard Kirk make a killer team. The action scenes are fantastic in this issue; Kirk’s artwork is very consistent throughout. I really became a fan of his work when he was on X-Factor with Peter David and was very excited to see him joining this creative team.Â  I am really enjoying Robinson’s take on these charactersÂ and things with him behind the helm things are certainly going to get worse before they get better.

Rating: 6 (out of 7) – I really enjoyed this issue, it looks great and the story is heading in a great direction!