Overall this was a solid issue, although I don’t think it was as good as the last. It picks up right where it left off last issue with the new group finding Negan in Rick’s prison. One thing that I wished was drawn out a little bit longer was Negan attempting to turn the new group against Rick, it reaches the resolution very quickly. But then again it kind of makes sense because this far into the zombie apocalypse you really learn that you can’t actually trust anyone new. I feel like the group is a little more trusting of Rick now that they see he is willing to keep bad men from hurting and taking advantage of other living people.

I’m wondering exactly how many years we jumped into the 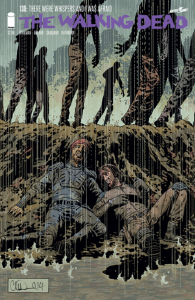 future because Herschel (that was such a nice reveal) is so big! We missed Maggie giving birth and I feel like that is a momentous occasion to just gloss over. I feel like we are missing out on a lot of great character moments and stories. But the time jump is a nice way to shake things up for this series. It’s a nice chunk of time that I don’t think will be revisited because the comic doesn’t really use flashbacks as a plot device.

I do like the last page reveal. It introduces something I didn’t think we would see in this world of “biters.” Although I’m not sure how much I trust who does the reveal, but I’ll stop there. You can decide for yourself and we will see how this plays out over the next few issues. It is definitely an exciting twist though!

This issue had some great art, it’s never a disappointment. I love Adlard’s layouts and attention to detail; he makes some of the scenes very suspenseful. He also does a terrific job with using the faces to show the emotions of the characters so you can almost tell exactly what they are thinking. I also like how Rick’s change in appearance is addressed and the way he gets when people treat him like a celebrity.

Rating 5 (Out of 7) – Interesting plot twist and fantastic artwork. Another good issue of zombie apocalypse goodness!