“You think you know the story. You’ve heard it before, a 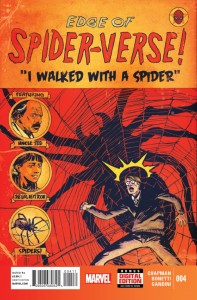 million times. But you’ve never heard the story quite like this.”

This quote really sets the stage for this issue and I cannot stress that enough. It is very true; we have never seen a “Spider-Man” quite like this. And I’ll be honest this was a difficult read for me because it does stray so far from what I know “Spider-Man” is and who I feel he should be. But in all the alternate universes and timelines, the Spider-Man can’t be as selfless and noble as our own Peter Parker. The odds of that are impossible. And in this issue we meet Patton Parnel, his uncle Ted, and Sara Jane. Patton’s spider powers develop quite differently than Peter’s and also what he chooses to do with them.

The writing was pretty good. It made me feel very unsettled. I definitely did not expect what happened in this issue to happen, and as a reader it was a fine line of being slightly interested in these new concepts and being turned off by them because they are so far from what I think of when I think of Spider-Man. This is definitely a Spider-Man I would be okay with never seeing again.

I enjoyed the artwork for this issue. Everything was nicely drawn and some of the more graphic scenes were drawn with a certain level of creepiness to them which I think added a lot to the story. The story and artwork worked very well together, it was a nice fit. Plus I really enjoyed the cover; it was neat and had a very retro feel to it.

Rating: 3 (Out of 7) – The weakest issue of Edge of Spider-Verse yet, you could probably get away with skipping it.