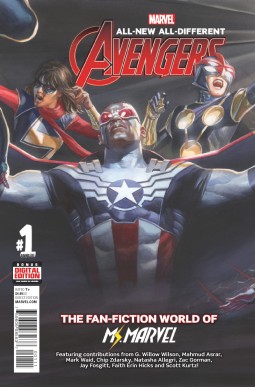 Before I got into comics, I used to get my superhero fix from fanfiction.net. (Especially the X-Men Evolution section where I shipped Kitty Pryde and Nightcrawler so hard.) All-New All-Different Avengers Annual  #1 pays tribute to and pokes fun at various types of fan fiction while showing that some of the Marvel Universe’s heroes are super nerds in the most adorable way possible. Throw in a true all-star lineup of creators, and All-New All Different Avengers Annual #1 is a light, funny read perfect for anyone who has ever had a Livejournal or AO3 account.

Writer G. Willow Wilson and artist Mahmud Asrar’s framing story for the beginning and end of ANAD Annual #1 is short, has clean, yet occasionally goofy artwork, and sets up the premise of the story personally as the comic transitions from the real world of the Marvel Universe to the fan fiction world. As an added bonus, Wilson delivers on a funny, fulfilling twist ending featuring a couple surprise cameos that make sense in light of their, let’s say, interests. Wilson and Asrar also immediately connect with fans by making Kamala Khan a compulsive, late night scroller of fan fiction even if it might skeeve her out.

Speaking of skeeviness, writer Mark Waid  and artist Chip Zdarsky lead off with a short story that is equal parts late Silver Age/classic science fiction melodrama and mansplaining. The basic premise of their story is that Captain Marvel and Ms. Marvel are fighting Skrull “Antagonauts” when Captain Marvel falls and gives her the mantle of Captain Marvel, which lets Zdarsky unleash pure insanity with Kamala wearing Captain Marvel’s red helmet and mohawk over her usual costume. But, “actually”, the Captain Marvel position belongs to another hero, who gets time travel retconned just in time to chide Kamala for being a “social justice warrior”. The story is an indictment of obsession with nostalgia and the “good ol’ days” and sticking to the way things were back in the 1950s and 1960s instead letting comics reflect their diverse readership in 2016. Waid’s tone isn’t preachy though, and he pokes fun at the clunky, technobabble filled, and exposition heavy writing style of superhero comics in his writing style. However, the real highlight of the short story is Zdarsky having a panel of Kamala’s reaction to the fan fiction as she goes from freaking out about getting the Captain Marvel mantle to rolling her eyes at the random return of an old school character and finally pure flames at the ending.

The next story isn’t really Ms. Marvel related, but is yet another argument for why Bee and Puppycat creator Natasha Allegri should either write or draw a She-Hulk solo series. This comic is a take on the “random prompt” fan-fiction stories where you pick a character, pairing, and fandom and write the most absurd situations possible involving them. Allegri’s story is basically She-Hulk fighting her ghostly ex and their haunted sunglasses while breaking the fourth wall and commenting to a pencil (Representing the fan fic author) about the ridiculousness of her story. It’s cute, romantic, and creepy all at the same time. Allegri uses an inviting palette of pinks, greens, and blue to make the story easy on the eyes while embracing the surrealness of it all. The comic is heavy on the non sequiturs, but endearing all the same and a reminder that asking for open fan fiction prompts on your blog and Tumblr could lead to some strange situations.

Zac Gorman (Rick and Morty) and Jay Fosgitt (Bodie the Troll) team up for a story that is part Furry, part funny animal story depending on 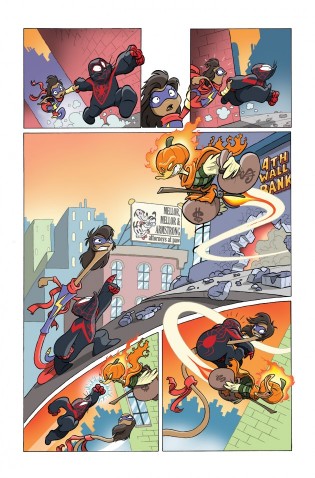 who is reading the story. Their comic is about a rattle snake version of Ms. Marvel (called Hss Marvel and amply made fun of) and a mole version of Miles Morales called Spider-Mole going out to get pizza in a version of the Marvel Universe only populated by animals. The premise is pretty strange, but Fosgitt is a supremely gifted storyteller using different panel layouts to keep the story flowing and exaggerated poses and faces that work well with Kamala’s embiggening powers. It’s a nice mixture of classic Looney Tunes with a side of newspaper comics, and Gorman throws in a few solid jokes as well in the comic while letting Fosgitt cut loose and have our snake and mole duo fight a duck version of the Green Goblin. At the end of the story, I really wanted Marvel to commission Fosgitt to a series of variant covers featuring his funny animal takes on different Marvel heroes.

Faith Erin Hicks writes and draws her own take on the “versus” battles, which used to be a big deal on comic book related forums while also giving  a nice shout out to “coffee shop AU” fan fiction with the help of Hellcat colorist Megan Wilson. Their story is simple: Squirrel Girl and Ms. Marvel fighting each other. And, along the way there are Lord of the Rings jokes, meditations on the frightening nature of Squirrel Girl’s squirrel summoning powers, and some cool background cameos from various Marvel heroes. Hicks also sets up a solid friendship between Kamala and Doreen that will hopefully get explored in either Ms. Marvel or Unbeatable Squirrel Girl. Her hyperactive superhero artwork is a nice bonus too.

The final story in ANAD Avengers Annual #1 calls out Internet creepers and stalkers as PvP’s Scott Kurtz weaves a tale of an entitled fanboy, who thinks that Ms. Marvel fell in love with him just because he yelled that a HYDRA agent was behind her. Like with Waid and Zdarsky’s story, the best parts of “An Evening with Ms. Marvel”  are Kamala’s reactions to  how revolting this self-insert, fan fiction writer is. During the fan fiction part, Kurtz writes her completely out of character as Kenneth (The know-it-all Internet stalker/nerd.) makes Ms. Marvel an object of desire and not a human being. This kind of story is fandom and fan fiction at its worst and is a good note to cut back to Wilson and Asrar’s framing narrative. It is the abyss of the Internet, and it’s time for us to stop staring back at it.

All-New All-Different Avengers  Annual #1 looks at fandom and fan fiction in a mostly humorous and sometimes critical light through the POV of Kamala Khan, the Marvel Universe’s biggest superhero fangirl. Add in the varied art styles from creators, who mainly work on indie titles or webcomics, and it’s worth picking up even if you’re not keeping up with the main All-New All-Different Avengers series.