Seems like 2001 was a huge year for landmark games as it saw the release of Halo: Combat Evolved and Grand Theft Auto 3. One game changed the face of FPS on consoles, and the other well changed the landscape of gaming for the past 10 years. In honor of their 10th anniversary, both games are getting re-releases this year. While we know a lot about the Halo CE Anniversary, Rockstar only announced Grand Theft Auto 3: 10th Anniversary edition this past week at NYCC. Luckily for show-goers the game was playable, so how did it fare? 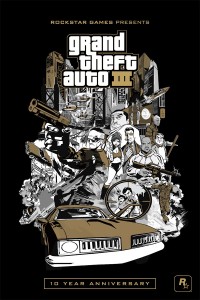 The first thing, and perhaps one of the most questionable decisions, is that this game is being re-released on mobile/smart-phone/devices only (as far as we know). So gamers who own an Android tablet, iPad 2 or the recently released iPhone 4S will be able to get in on this game.

With that said, how does the game look and work on the devices. Well, they only had it playable on iPad 2 on the showfloor, and the game looks nice. I mean it ran at about 15-20 frames per second (according to the little meter on the screen), but it looks like they cleaned it up a bit from the Playstation 2 release. There was no real major slowdown, but it still has the pop-in issues, which plagues open world games.

But that’s not really what any of you want to hear. You want to know how a marquee PlayStation 2 game controls without any noticeable buttons. And you’re just in luck, Rockstar makes the entire experience completely customizable. Want a left-handed mode, just move the virtual buttons around so the action keys are on the right. Want to re-arrange the HUD, you can do it as well. Want to remove some stuff, well I wasn’t really informed either way about that.

Now the real fun comes when you actually try and play the game. The default controls are mapped for a right-handed person. So if you place your left-hand any place on the left of the screen, a virtual analog stick will appear on screen, and this allows you to move your main character. It works decent enough, but then you get to the right side of the screen, and this is where things get interesting. While it may be hard to replicate the feel and lay-out of a controller on a touch-screen, Rockstar has attempted such a thing? 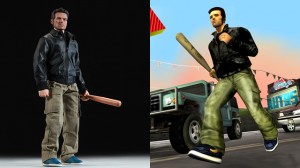 With context specific buttons in the game. For example, while on foot, there are 3 icons on your HUD. There’s a walk/run button, it toggles on/off, so your character will either walk or run, no walk into a run or anything like that. Then there is a jump button, which of course makes your character jump when pressed. Finally, there’s a weapon button. Depending on what’s equipped (gun, baseball bat, fists, you know the assortment) your character will perform an attack with said item. Sadly, I didn’t get a chance to try out any guns so I really don’t know how the aiming works on the device. Granted, the franchise wasn’t really known for pin-point precision anyhow!Â The layout works in practice, and works even better when you have nothing going on, but does become a bit tricky when asked to do something in a mission.

In addition to the standard lay-out, there are contextÂ sensitiveÂ buttons as well. For example, one of the hallmarks of the GTA-series is the ability to jack a car. As you would note, no mention of a car-jacking icon! That’s because there isn’t one at all times, only when the availability to steal a car is offered. Which again sounds fine on paper, but I found it didn’t always work. Had to press it several times once to jack a car, and even then it was kind of awkward. Maybe the button activates much sooner than the car is in actual range for jacking? Who knows!

Now getting into the car, opens up a WHOLE new world of trouble. For some reason, they decided to ditch the virtual analog stick for car control. Instead, the left-side of your screen becomes a right and left directional pad. Which I found to be a lot more awkward since there aren’t really degrees, just you moving in one direction or the other. And on the right-side is a ton more buttons. You have one for gas and brake, which were oddly placed, I thought. Since they aren’t the two most-pronounced buttons? Then you have one for sharp-brake, and to exit the car, and there were like 2 more buttons, that I never quite figured out what they did in the demo?

Anyhow, Grand Theft Auto 3 will go down as a landmark game. This re-release will be a most interesting study, albeit not the definitive version of the game. It will be interesting to see, if a major console seller, does remarkably well on the mobile app scene. Only time will tell as this game is set for release at the end of October.