Based on the cover of this comic, I really wasn’t expecting much. The artwork of Wolverine in particular on the cover was so unappealing it almost made me not buy the comic. That combined with how much I hated 4 out of 5 issues of Schism, it was hard to spend $3.99 on this comic.

However, I thought I’d give it a try. It was a one-shot so maybe a lot would be explained in the issue. If nothing else happened in this issue, all I wanted to see was how each X-Men member chose whose side they were on. And that’s EXACTLY what I got. 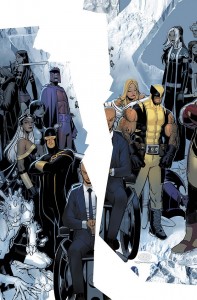 This issue took time to focus on each individual member of the X-Men (some more than others) and showed how they decided whether they would stay at Utopia with Cyclops or go back to Westchester with Wolverine. For some, the decision was expected, while others were more surprising. Overall, the reasoning for each individual’s decision made sense, though some seemed like it was solved more simply with pleading or bribery.

This issue was a great setup for the Wolverine and the X-Men #1 coming later this month, and the new Uncanny X-Men #1 set to hit shelves in November. Personally, I have no idea whose side I’m on at this point so I’ll probably just get the first issue of each and then go from there. Both of the teams are fairly even with some of my favourite characters on opposing sides so it makes it tough to choose (which I’m sure is what Marvel was going for).

There’s just one thing I can’t really wrap my head around. Why is Wolverine the one going back to run the Westchester school for mutants? He seems far from a Professor Xavier kind of figure. I just feel like the roles would be better reversed with Cyclops teaching the kids and Wolverine more or less, embracing the violence.

It may seem like I have a lot of problems with this book, but don’t get me wrong, I really enjoyed this issue. It’s everything I wanted in Schism put into one book. So my advice is, if you’re a big X-Men fan, this book is a must-have. It’s a perfect precursor for the new X-books coming in the next few weeks.

New Reader Accessibility: 5 — It is a one-shot so it was specifically written to be able to stand on its own, without any prior knowledge. However, just to make sure, the first page of the comic is dedicated to quickly catching you up with everything that has happened recently in the X-world.

Recommendation: Buy it — It’s the final issue of the modern era (besides Uncanny #544) and for any X-Men fan, this will be a wonderful collectible.

I love comic books more than life itself. Cheers!