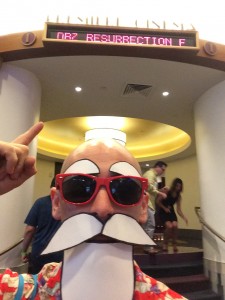 *Warning: if you’ve never seen an episode of Dragon Ball Z this review is going to sound like complete gibberish*

Kicking off the first night of Anime Expo 2015, a throng of Dragon Ball fans descended on the LA Live Regal Cinemas for a chance to catch the world premiere of the newest DBZ film dubbed by the beloved American voice cast. I was lucky enough to get a seat just before showtime and rub elbows with my fellow cosplayers and Dragon Ball fanatics.

Hot off the release of “Battle of Gods” just last year and the announcement of a brand new series, the Akira Toriyama-penned franchise has been given new life so it’s only fitting that one of the series’ most fearsome villains be resurrected as well: the alien tyrant, Lord Frieza. But last we saw of Frieza he was extremely dead. Chopped up and blasted to ash dead (thank you very much, Future Trunks). However, in a franchise where almost every main character has died at least twice, death is but a minor inconvenience especially when the Dragon Balls are involved.

The remnants of Frieza’s army come to Earth in search of the mystical orbs and run into Emperor Pilaf, Mai, and Shu. After some lighthearted shenanigans it isn’t long before scouters are exploding and Frieza is back in all his purple badness. Out for blood, Frieza is determined to destroy the last of the Saiyan race and their adopted home planet.

If you’re a fan from the Toonami days you’ll recognize many of the voice actors here, although if you skipped “Dragon Ball Z: Kai” (like me) you might be pleasantly surprised by Christopher Ayers’ masculine (but no less petulant) turn as the resurrected Frieza. Adding to the familiar vocal medley are Ian Sinclair and Jason Douglas, who return as Whis and Beerus respectively. And despite not having a musical number this time around, Christopher Sabat’s Vegeta manages to find fresh tones for the Prince of All Saiyans. But it was Todd Haberkorn’s performance as fellow Toriyama creation, Jaco the Galactic Patrolman, that stole nearly every scene he was in. Thoroughly ridiculous, I hope we haven’t seen the last of him. 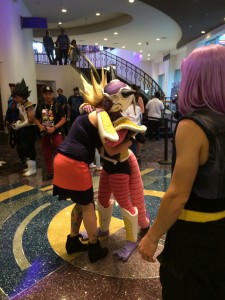 Fans who may lament the irrelevance of non-Saiyan characters will be happy to know a few mere mortals get into the fray, including Tien and Master Roshi. Nevertheless, my lone gripe is that this is still the Goku and Vegeta show. Despite not appearing on screen for quite some time, the last full-blooded Saiyans around drive the action. Even Gohan was de-powered quite a bit, which always irks me.

Overall I enjoyed “Battle of Gods” more because I can’t divorce the emotion of having had the characters I love return in such a big way after such a long hiatus. Nevertheless, this is a fantastic entry in the franchise, let alone for being the 19th film. They’ve really managed to balance the humor of the original Dragon Ball and the action of Z that I felt they were going for in “Battle of Gods”. They found a way to include some characters who have been neglected in recent years and the soundtrack sports a catchy j-pop track and a heavy metal song about the space dictator himself.

Special thanks to Funimation for giving fans such an early sneak peek. Catch “Resurrection of ‘F'” in theaters August 4 through August 12! Tickets on sale now on Funimation.com

Review 6 out of 7 – a suped-up version of the Frieza Saga complete with new transformations, hilarious jokes, and catastrophic destruction.. and it only takes 90 minutes this time. Lift your arms and give Goku your energy.. and your hard earned Zeni.