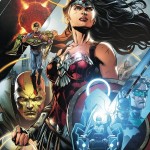 Having a team book is all about balance. Balancing the various characters and their journey in a single issue while pushing the story forward in a meaningful manner.

Justice League #42 fails on its balancing act. While it does a decent job of pushing the overall narrative forward somewhat,we spend so little time with each of the various threads to pull off an interesting issue.

There is some table-setting going on so hopefully it starts paying off.

During DC’s Comic-Con presentation, David Ayer said while good vs evil is fine and dandy, it’s time for bad vs evil. He must have gotten an advanced copy of Secret Six#4, which is highlighted by a fun, chaotic and surprisingly courteous fight between two teams of “Bad guys.”

I fear saying anything else about the issue because I really do think it’s something you should experience. Some amazing twists that will leave long-time fans giddy as heck. Some fun character moments. Chili dogs! And so much more.

Go pick up this book.

Captain Britain and the Mighty Defenders #1 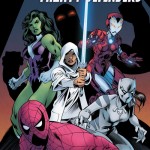 The problem with Elseworld/Alternate Realities stories is they need to spend a lot of time setting up the differences in the world.. usually, the minor differences make for some vast changes, but not too often do you see them be so positive. With Tony Stark sacrificing himself in the caves, and allowing Doctor Yinsen to live, he actually does great work and create a near Utopia on Earth.

It threw me for a bit of a loop especially since things didn’t go to hell either… well eventually it did, but that was due to Doomvine intervention (I’m going with it, boo me all you want!). Not often you see a company showcase that our hero is crap at his job and keep it that way.

Going back to original point though for a book titled “Captain Britain and The Mighty Defenders” they don’t actually work together in this book. Like once they get together, all the heroes are quickly over-ran and the book ends. I guess need a reason to get us back next month.

There’s some meat on the bones, but this isn’t a book you read for a full meal.