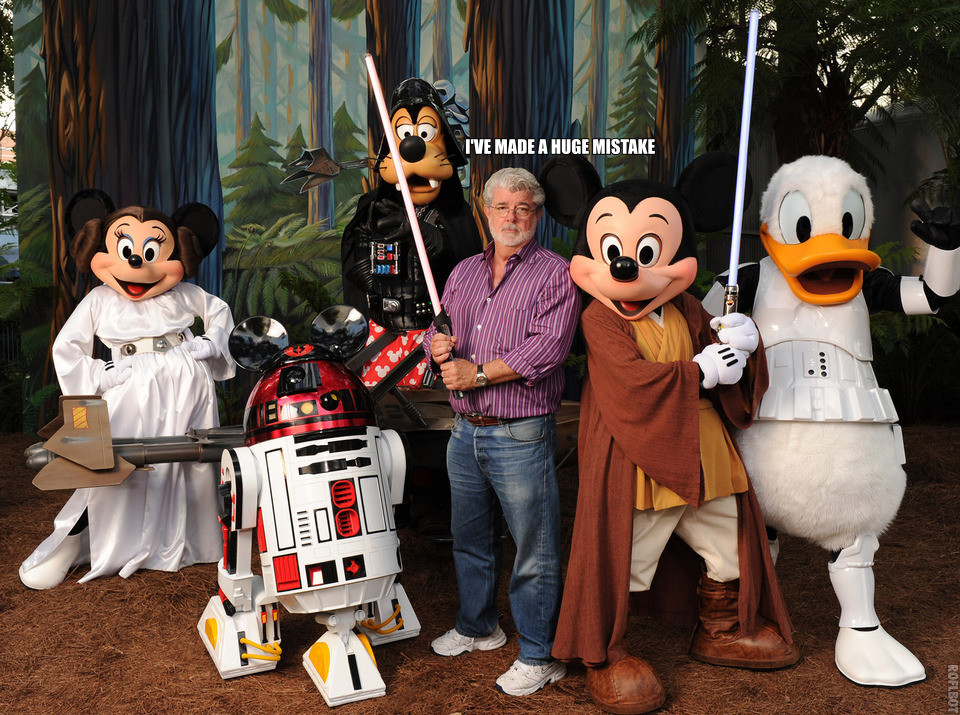 “A man goes to the movies. The critic must be honest enough to admit that he is that man.” – Robert Warshow

*SPOILERS AHEAD – YE BEEN WARNED* When being one of the few voices of dissent on what will be the highest grossing film of all time, I have to preface this criticism with some qualifiers (along with the fancy pants quotes you see above). I didn’t hate “The Force Awakens”. I thought it was okay. I don’t think you’re stupid for liking it, loving it, wanting to take a case to the Supreme Court to legally marry it, etc. We all have opinions and I’m just another idiot on the internet. But this idiot is part of a growing chorus chiming in on the Emperor’s various states of undress (sorry not sorry if you’re imagining a naked Palpatine right now). I find it necessary to the discussion of this important piece of filmmaking that us naysayers make our various beefs with Jar Jar Abrams’ Episode IV remake known.

Starting off with the easiest target, amirite? Desert planet, novice Force users, giant death ray thingee – I could go on but we all know TFA played Mad Libs with the Original Trilogy. It wouldn’t be such a knock against it if it weren’t so paint by the numbers. Say what you will about the prequels but at least they were entirely different stories with new locales. TFA gives us another desert planet (minus 1 sun), a snowy locale, and some places that look like Yavin 4 but aren’t Yavin 4. If you’re going to sell me the same story at least dress it up with a new vest or SB Dunks. This goes for the vehicles, too. The biggest advance in starship tech in 30 years was giving TIE Fighters and X-Wings a new paint job?

Speaking of unoriginal tech – Death Star 3.0? Does the Dark Side have a fetish for spherical super weapons? They’re already 0 for 2 on moon-sized planet-destroying projects so naturally the First Order’s logic must be “We have to make it EVEN BIGGER this time!” Weapons tech may be stagnant but thank goodness hologram science has advanced to the point of making giant lifelike projections. That should be really useful when “Jaws 19” comes to the Coruscant AMC.

But what irked me most while I sat in my $18 seat in the wee hours of the morning was Rey’s Super Saiyan God level of mastery with the Force. I was onboard with Rey as a scrappy scavenger with a mysterious past. Her mechanical mastery of the Millenium Falcon didn’t bother me one bit. But then it was coupled with multilingual skills (a facet I liked), Donatello-level bo staff skills, Jedi mind trickery mere hours after learning that the Jedi weren’t just myths, and (most frustratingly of all) Force-grabbing a danged lightsaber and making Jedi/Sith-trained Kylo Ren look like a youngling.

Max Landis’ video rant encapsulates a lot of what’s wrong with the character, the least of which is her gender. I’m all for women in the Star Wars Universe. Tough, heroic, bad-ass women. But when a supposedly humble character can breeze through her challenges like she’s got all the cheats turned on I don’t see what the stakes are or why I should care. Milla Jovovich’s super-powered Alice in the “Resident Evil” series comes off more complex. At this point, people handwave that complaint with two arguments: 1) “It’s obvious Rey has Jedi lineage/training that will become known in the next movie” and 2) “Her Force prowess is no more ridiculous than Luke or Anakin’s so chill out.”

And to that I say “Yousa talking big doodoo.” 1) So the audience is supposed to take it on faith that Rey’s “awakened” powers will be satisfyingly explained in the next 2 films? Movies have enough problems answering their own questions well, let alone carrying over baggage from other films. 2) Luke uses the Force to get a lucky shot in “A New Hope” but he struggles throughout the series, requiring the aid of his friends. Anakin’s podracing skill is noted before the big race and while his Mr. Magoo-like destruction of the trade blockade is too much to swallow, his high midichlorian count (yeah, I don’t like having to bring that up anymore than you do) didn’t manifest itself in Force-manipulation and Jedi mind tricks. Both Skywalker men had to be trained. Rey kicks ass in a matter of hours. The Force didn’t just awaken – it’s staying up all night on space cocaine giving Stone Cold Stunners to the Dark Side. If Episode VIII delivers a satisfactory reason for why the Force is so jazzed on Rey I’ll strike this from the list, but I don’t see it coming. How is Kylo able to freeze and knock out Rey in one scene, but then she resists his interrogation in the next?

And finally, here are my “old man gripes”. These are my most ludicrous and cantankerous complaints (not to be taken too seriously):

Maybe George was right. Disney bought the rights to Star Wars and was so preoccupied with whether or not they could make a new trilogy that they didn’t stop to think if they should make a new trilogy. ROTJ ends the saga so succinctly, you could see why the prequels were a safer route. Lucas’ notes for the direction of Episodes 7-9 were ultimately unused by Disney. Lucas-haters rejoiced but I’m of the opinion that maybe the man who created this entertainment empire/cultural touchstone (with some underrated help from his first wife) had some insight into the continuation of the Skywalker clan.

I have seen the film twice now and I have softened on a few things. I found the acting very stiff on first viewing but I was far less critical the second time around. I really enjoyed Chewie getting more screen time and C-3po was probably my favorite fan service moment of the film. Despite her Force superiority later in the film, Rey’s crafty piloting of the Millenium Falcon is one of my favorite Star Wars moments. I really wanted to love this movie and be apart of the phenomenon. I love the Star Wars franchise and while I’m not well-versed in the world beyond the movies I craved a new experience in a galaxy far, far away. Instead I got a bumpy ride over well-tread ground. Maybe I’m asking too much of a glorified, toy-selling, money-printing, sci-fi fantasy pastiche. I just hope the House of Mouse delivers something better next time.