The A-Z of Geek Cinema: D is for District 9 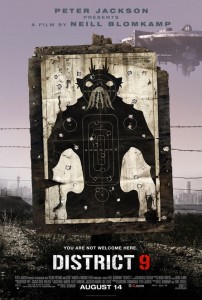 I’ve cooled a bit on this film since I first saw it in theatres (when I called it one of the best movies of the last decade [hyperbole much?]), but I still think it’s definitely great. Based on his own short film, Alive In Joberg, District 9Â is Neill Blomkamp’s feature directorial debut, andÂ one of the more original sci-fi films to be released in the recent past. A screenplay full of depth and social-cultural subtext, combines with astounding effects and fully realized characters to create a world where the aliens didn’t invade, they languished.Â The “Prawns” look like practical effects; the fact that they were done ENTIRELY in CG, and that the entire film was done for $30 million is vastly impressive.

All that said, it wouldn’t hold up as well as it does without the astute direction of Blomkamp or the good character work of Sharlto Copely. Copely’s character, Wikus van de Merwe, is not a good person, but he is not a villain either. He is just a normal human, in a way that is recognizable to most of us; the fact that he can go from chuckling at the sound of “Prawn” eggs popping in a fire to being emotionally agonized at being forced to shoot a “Prawn”, and that it isÂ believableÂ that he would do so, is just one example. The film comes close to turning the audience against Wikus entirely at times, because he IS such a despicable bastard in some instances, and the line is touched, but not crossed. He wins the audience back over.

Much has been said of the racial subtext of the film, and whether it is valid or not. I think it’s pretty plain that it is, but your mileage may vary. I find the accusations of racism against Nigerians towards the film to be ridiculous though. The nods toward Cronenbergian body horror are also appreciated, as Wikus goes through his terrifying and often disgusting transformation; there is a section of the film which is incredibly intense in terms of the terror Wikus evinces.Â Also, do I even need to mention at this point: MECH SUIT BATTLE. That entire section of the film was perfect action, as far as I’m concerned, in a way that was neither claustrophobic nor confusing. 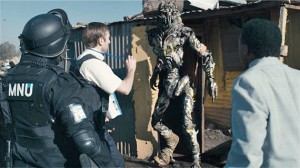 Blomkamp was supposed to direct a big screen adaptation of Halo, and a lot of influence from the game (and presumably his adaptation) can be seen in the production design of the alien weaponry. It’s a shame that Halo is never going to happen; the studio and Microsoft’s battles over content and budget made sure of that. That said, it actually has worked out for the better, as Blomkamp’s career is certain to take off elsewise. District 9Â was an amazing debut feature, and his follow-up film Elysium, starring Matt Damon and coming out next year, looks to be just as inventive and challenging from a subtext standpoint. He is the real deal.

So yes, this film is great. If you haven’t seen it, do so. Especially if you are a fan of scifi with a humanist bent. Here’s hoping the occasionally discussed sequel (District 10?) surfaces sooner rather than later.