The A-Z of Geek Cinema: W is for Watchmen 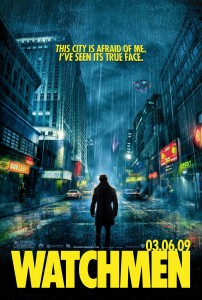 Let’s get this out of the way right now: I loved this movie when it was first released. It’s one of my favorite graphic novel/comic stories, and I’d been heavily anticipating it since the first trailer was put out with The Dark Knight. I saw 3 times in the theatre, and for an almost 3 hour long movie, that’s quite a bit of time put in. I’ve backed off my initial assessment of “amazing” a bit since, but I still like the movie a lot. I feel like the additional scenes added to the Ultimate cut make the story flow better, but the animated sequences representing the Black Freighter comic story don’t really add anything worthwhile to the film, and in fact, make the pacing more uneven.

With all that said, it does spark a lot of notions in my head about the problems of adaptation. I wrote a research paper a few years ago on V For Vendetta, and how its adaptation was a good story in its own right but far from a good adaptation of its source material. I even mentioned Watchmen as another work of Alan Moore’s that would cause problems to anyone wanting to make a movie. And, lo and behold, there are issues with the adaptation. But, surprisingly, there are completely different from V’s; in fact, they’re almost the complete opposite.

See, there’s a difference between “adaptation” and “translation”. V For Vendetta and From Hell are adaptations, with all the problems and issues that implies (especially From Hell, but that’s not a [long and troubled] road I want to travel), whereas films like 300Â and Sin City are more translations, taking what was done in graphic novel form and putting it directly on film, filling in the panels’ “gutters” with connective tissue. Watchmen falls in the middle, some of it almost exactly translated from the book, to the extent of matching up panels and angles, and some of it vastly mutated and shifted from the original. The problems start to show up when some important things are left aside, even in the wake of direct translation. 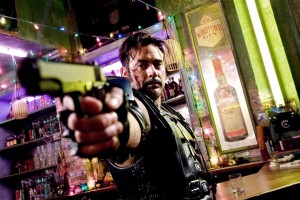 Here’s a small example: in the book, Jon Osterman and Janie are on their date at the carnival, when the photograph (which he later holds on Mars) is taken. This moment is captured exactly in the film, down to the details of the photo matching up perfectly. But the subsequent events happen slightly different. In the book, a fat man accidentally steps on Janie’s watch, which Jon then offers to fix, as it has been established his father was a watchmaker and he had taken a keen interest in it as well before being forced into physics. Later on, he HAS fixed it, but has accidentally left it in his coat pocket in the experimental chamber, which he goes back to get and then gets locked in, which leads to his dematerialization (that Janie refuses to watch) and later reincorporation as Doctor Manhattan, which he equates to putting himself back together like a watch. This series of events establishes, in short order, 1) his viewpoint of life as like clockwork, 2) Janie being part of what can be considered the cause of the accident, and 3) she left him when he needed her most.Â  The film features the photo being taken, but the watch Jon goes back for is his own, and it makes the accident more of a true “accident”: no one else is at fault except his own forgetfulness. His early history as a watchmaker is not established except in a fleeting moment post-disintegration, though Janie does still leave when he needs her. These changes may seem inconsequential, but they change Osterman’s motivations and background just enough that his actions as Doctor Manhattan seem more without cause. Notice the one detail that remains constant: Janie leaving the scene of the accident before Jon disintegrates. Where Doctor Manhattan is said to be without emotion, I believe the implication here is that his later cheating on her with Laurie is because he’d already lost faith in Janie long before. He justifies it as her getting older and more bitter, but that is a rationalization for what at heart is still human pettiness. 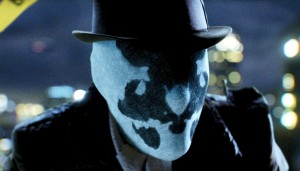 All this said, I don’t mind most of the changes made in the film. They may slightly change some motivations, or make some later actions more inexplicable, but nothing breaks the narrative to the extent that V and From Hell do. There is ONE change that I actually do not like, even though I understand why it was done. At the end of the film, after Rorshach’s death, Dan comes back and beats the crap out of Adrian, and Adrian does not fight back. It’s presented as him taking almost a martyr-like pose, as penance for his role in the deaths of millions. This is not from the book, in which Dan and Laurie actually have sex with each other out of fear and desperation at the situation they’ve been privy to, then depart Adrian’s base without incident. This change is obviously designed to give the audience a chance to identify more with Dan, even if it is a false sense of moral superiority, as Dan still is going along with Adrian’s plan, and tacitly approving of it, even while protesting the opposite, because he does NOTHING to change it. The violent beatdown is akin to a whining child complaining loudly but who still does what he is asked to.

The tail end of that scene in the book features Doctor Manhattan confronting Adrian in his private sanctuary, and after a brief exchange, the key dialogue exchange of the story occurs:

Adrian: Jon, wait, before you leave… I did the right thing, didn’t I? It all worked out in the end.

Doctor Manhattan: “In the end?” Nothing ends, Adrian. Nothing ever ends.

After all of Adrian’s plans have come to fruition, and his peace has been achieved at great cost, Doctor Manhattan tears it all apart in one simple sentence: life is not a story with a definite ending. Adrian might have achieved peace for now, but eventually humankind will do what it has always done and the world will spiral down into darkness again. In the film, this line is spoken to DAN by LAURIE, who prefaces it with “I know what Jon would say.” By not having it said by Jon to Adrian, it’s robbedÂ of all its power, and its place in the greater meaning of the story. He doesn’t see Dan as his equal, so Dan chastising him and beating him down would not have any great effect on his psyche. The god-like and all-knowing Doctor Manhattan saying “Nothing ever ends” though? That is enough to give him pause, to cause doubt.

There’s many other small examples in there I could raise, but I don’t need to belabor this point. No adaptation is perfect, but the small changes always stand out more to me as problematic, because the small things add up to larger thematic changes. In any event, I like this movie. But I love the book.