It was just two short weeks ago (and I remember because it was the first one I did!) that I was raving about how awesome Brightest Day 21 was, and how far the series has come over the last several months. Two weeks later, I am smacked with reality once more, as the series while good, still has its fair share of problems, which are highlighted in this issue.

One of the big problems I had with the series early on was juggling so many storylines at once, eventually you’llÂ gravitateÂ towards some more than others. And the weeks that focused on the story you enjoyed were fun, and the ones that didn’t were kind of meh. As the series went on though, many of the plots and characters started to converge on each other so you would have more going on in a single issue.

Enter Brightest Day 22, coming off of the heels of an issue run, it feels like I haven’t been reading this series for the past few months. I don’t know, maybe I just have a shorter memory than I thought, perhaps it was because the last time I saw FireStorm was in the pages of Green Lantern Corps on Qward, maybe he just hasn’t been around, but reading the first few pages of this comic, just made me feel like I was missing something.

After a few pages though, the comic started to pick up. The whole dynamic with the black lantern Firestorm, who also happens to have Ronnie’s father and Professor Stein, Firestorm, Anti-Monitor and of course theÂ sentientÂ White Lantern… er lantern. It makes for a rather interesting issue with some twists and turns along the way.

The art is a mixed bag for me. Like the first panel of the comic really does nothing for me. Its like a drawing which isn’t complete, it feels lacking in some regards, and I’m not quite sure why. 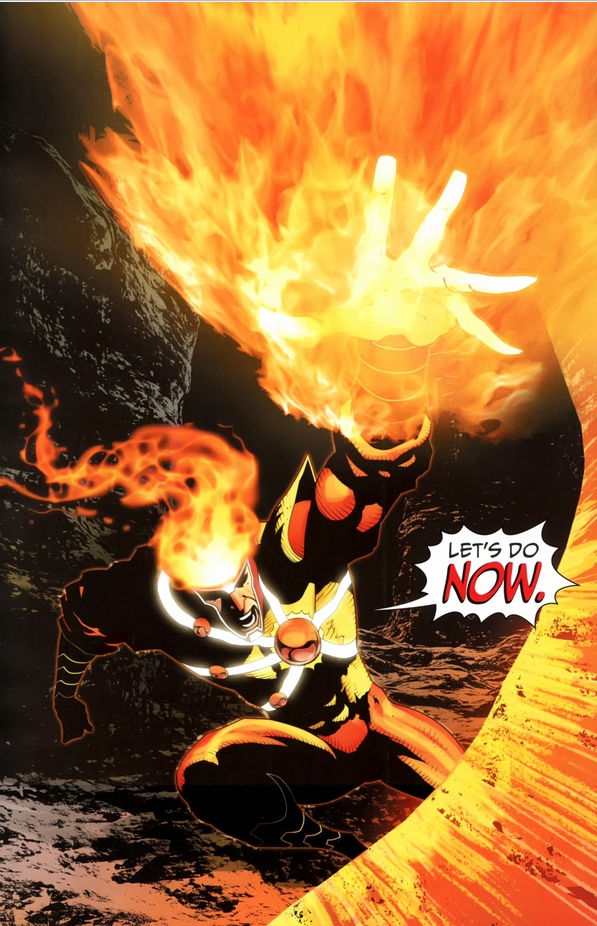 At the same time, the simple art style really can be used marvelous like in the splash page above. At the end of the day, expect solid, but not remarkable art from this issue.

Recommendation: At the end of the day, it really is a series that is 2 issues fromÂ completionÂ (though DC did recently add a 3 issue mini-series as a follow-up) so it would be a terrible idea to jump on or off now. So really whatever I do recommend doesn’t make a lick of difference, but it was an enjoyable issue, just not my favorite. And even as someone who has read it since day 1, I felt lost at first.

New Reader Accessibility: 1 Instead of repeating the same tirade I did when I reviewed issue 21, I will just say that this issue felt even tougher for a new reader to jump into. As a person who has been reading this comic, I felt that I needed a lot more backstory than what was offered here. The gap between the two Firestorm issues was rather long especially when you consider ALL of the things that have taken place in the interim.