Over the past two years, many have been disappointed in Justice League and I can understand why. It’s first year saw a slightly prolonged introduction story, followed by an arc that feel very flat with a new villain that was pretty forgettable, and a League that felt less like a team and more like a group of people who get together when they are needed. In it’s second year, it really picked up, and I think that is in no small part of the change of Lee to Reis. The Green Arrow solo issue, the Throne of Atlantis arc, and even the few issues before this issue which have been both expanding the team and leading up to Trinity War have been so much better than it’s 1st year’s worth of stories. And this issue, part 1 of Trinity War is a fantastic start to an event.

First, I want to commend DC. I think this type of event, a 2 month ‘classic’ crossover is something that the big two should do more often. The Green Lantern line has done them in the past and has ‘Lights Out’ coming up, and Marvel is doing something similar with ‘Battle of the Atom’ and I think it’s a nice variety to larger events that are mini-series like upcoming Infinity and Forever Evil. And while I’m excited for those mini-series, it’s nice to have a short event like this, cause often I’ve found the shorter the event, the better the writing. Now, I know some out there will say that these events also boost the sales of monthly books,. which is true, it’s just nice to see a little variety with ‘Event Comics’ these days.

I also want to commend Johns on really taking advantage of the New 52 with Trinity War. Has it been a long time coming and teased? Yes, which to be truthful, has been frustrating. However, a story like this, with 3 different teams facing off, would have been so much more contrived and forced in the old DCU. With a blank slate, a 5 year history of these heroes, this conflict seems much more natural and logical, and really helps to paint how the New 52 is and will continue to be a different DCU than pre-Flashpoint.

The story itself takes advantage of someone who has been reading Justice League and Justice League of America, but also allows new readers to jump on board. We get something more than a classic super hero conflict. Frankly, it isn’t a surprise that the JL & JLA get into a fight, since the inception of the JLA has been touted as a team that could face the JL. However, we also see how Justice League Dark will be brought it, how players like the Question might be serving different roles than readers thought, and how it seems there are larger mysteries about the villains themselves.

This is a really great start to an event, and my hopes is the next 5 chapters follow through on what was built here. For every part I saw coming like the death of a certain character, there were two things I didn’t see coming (the Question and Plastique for example). I’m also interested to see how Trinity War leads into Forever Evil, and what stories has Johns and DC have been building since the beginning of the New 52.

And a final note, DC Collectibles should really put out a pack of Madame Xanadu’s tarot cards from this issue. last year SDCC had those Court of Owls masks, this year it should Tarot Cards! 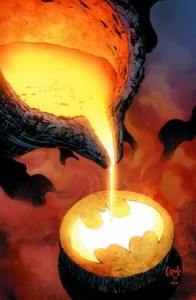 So Trinity War started.. Its what everyone is talking about. While the start of it in Justice League #22 began this week, I actually did enjoy it a lot. As we all know this is the second week of the month or known as Snyder week, which means that Batman #22 came out as well. This had a bit of an edge on Justice League and is my pick of the week.

As I had mentioned in my review, Greg Capullo was put on this earth to draw batman comics. His art is so interesting and what he does really does bring the book to the next level. We know the writing is going to be great with Snyder, the extra layer Capullo adds really makes this the best book in the new 52 still after two years. The page with the conversation between Bruce and “The Riddler” is so perfect it really sets the tone and allows for really the first sort of riddle.

I always enjoy origin stories no matter how many times they are rewritten, I enjoy seeing different people add different elements and make the story deeper then it was before and that is what Snyder is doing. The Riddler is one of my favorite Batman villains and seeing him get the Snyder treatment so far has been exciting and makes me want more. I loved death of the family and what happened with the Joker, but this seems so much more different and makes me crave more and more.

We know the trinity war is going to cause a shake up in the DC Universe, so I am glad they are going back and telling an origin at this point so that this series can kind of be off on its own like Wonder Woman is. I really went back and forth trying to decide between this and Justice League for my pick of the week, I think it was the “riddle” page that in the end won me over. 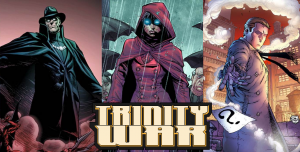 My first exposure to superheroes was the Superman: The Movie. I loved it for the same reasons most boys loved Superman: he was invincible, could fly and had super strength. Since my dad had a thing for Lynda Carter, he would watch the Wonder Woman tv series and it fascinated me because she was similar to Superman. Then, Tim Burton’s Batman film came out and I was immediately hooked into the DC universe. However, I didn’t start reading comic books regularly until early 2012, 6 months after the New 52 relaunch. Having devoured as many of the books as I could afford, I immediately went backwards and read the entirety of Flashpoint. Trinity War is the first major DC event since the relaunch. For me, it’s a personal reward for all the time and money I have put into this hobby. Thankfully, Geoff Johns delivered an exciting, gorgeous, and cinematic opening to a story that may be remembered as one of the greatest DC stories ever told. This is why Justice League #22 is my pick of the week.

From the first page, I was drawn into the mystery behind who or what is orchestrating a war between the Justice Leagues. John Constantine and his team don’t make an appearance in this issue but opening the story with Madame Xanadu was a perfect way to pull them in. The story then picks up speed as it moves from scene to scene; pulling the other characters in while building tension and adding to the mystery. So when the two Justice League teams finally confront each other, I can only smile and giggle like I did when I was five years old and watching Superman: The Movie for the first time. This book epitomizes the wonder of a DC story and it’s only the beginning! The company couldn’t take my money fast enough. That’s how badly I want to read the remaining five issues.