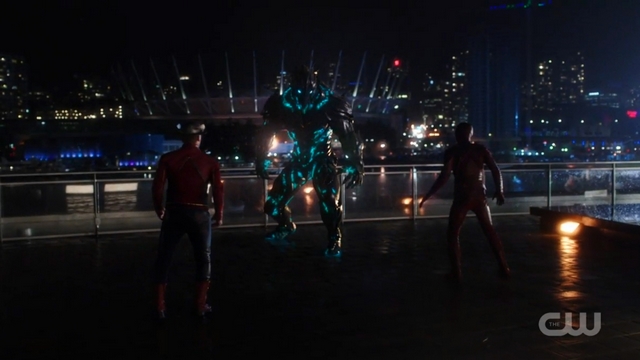 Woah mid season review spoilers are running your way. Our episode begins with a flashback  of Julian (Tom Felton) set in India. Set 4 years ago and we see how he found Alchemy’s stone.

In the present, Barry (Grant Gustin) and Team Flash are trying to get details on Dr. Alchemy. So it turns out Julian wrote a paper about the philosopher’s stone. Eventually, he explains to Mr Allen, he exhausted his inheritance searching for it with no results. Guess Barry isn’t the only one keeping secrets.

On Earth-3 we get to enjoy a Joker like version of the Trickster portrayed by Mark Hamil himself. He’s would be heist is cut short by Jay Garrick (John Wesley Shipp). Barry cuts to the chase(hah) and asks for his help on Savitar.

As the speedsters return The Flash gets the details from…The Flash. Any who, Savitar was the first being granted super speed. Before his awakening a figure like Dr. Alchemy would prepare the world for his coming. He’s no god but he has a god complex. It’s also important to note, we’ve crossed into magic. All villains prior were made via science and so forth. Jay sure does know a lot I wonder if he’s the only that can access has access to the Speed Force library and when can Barry get access to it? 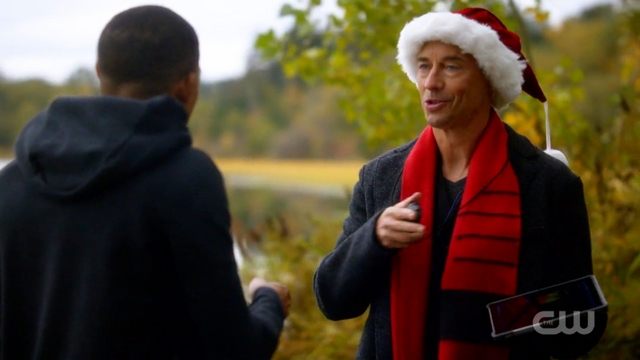 As the heroes get no leads, the older comrade advises Barry to enjoy his life and time. That’s funny but totally understandable that even speedsters need downtime. During this time, Wally (Keiynan Lonsdale) is being trained by HR (Tom Cavanagh) in secret. So they both have definitive proof he is faster now that Barry was in season 1. Yes, Wally is fast and dangerous.  Cisco (Carlos Valdes) is also randomly seeing brother Dante(Nicholas Gonzalez) at STAR Labs, weird.

Anywho, the Flashes arrive to foil Dr. Alchemy’s plan to turn more people into metas. But before I could properly geek out on their team up, Savitar stops by to say hi. Being a man of experience, Jay commands the Scarlet Speedster to get the stone from Alchemy. In the time being the Crimson Comet distracts Savitar. When I say, distract I mean be his punching bag. Trust me the scene is um…ouch.

Before it’s lights out for Jay, Barry is able to retrieve the stone from Alchemy. He also discovers that Mr. Albert is Alchemy. So, Julian had earned his way into a pipeline jail-cell. The Flash confronts him but Jules is less than willingly to answer questions. But he’s still snarky! 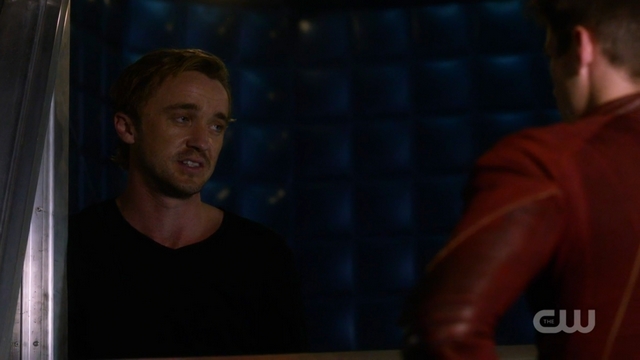 The ancient box that holds the Philospher’s Stone as per Cisco is nothing. Apparently, it’s undetectable on any radar. So yeah that’s not creepy. During this time, Wally is getting roasted by the rest of the West family. Again, I get that Joe (Jessie L Martin) is a concerned parent. However, you have a super fast teenager out to do some good in the world.

Barry decides to come clean on his identity. Albert expresses that all the evidence was there for him to have figured that out. Yeah, no. Any who, it’s real story time about the stone and Alchemy. Julian’s expedition in India resulted in everyone being killed. So he fled to America to escape his failure and percussion.

Elsewhere, Cisco’s dead brother tells him he can be reborn into the world again. The heartbroken Cisco is asked to open the box of the stone and let’s Savitar loose. He tearfully accepts and lets out the big bad. Savitar and Barry then head to the Speed Lab to fight it out. Of course, our hero is out classed and getting tossed around like a rag doll. To prevent his death Wally races to his aid (yes!). But instead they’re both in danger now. 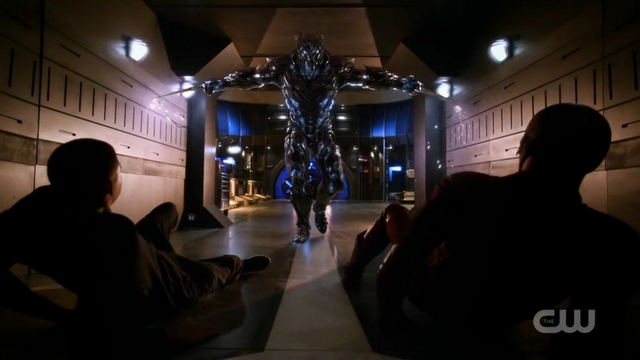 Caitlin (Danielle Panabaker) and Cisco share a powerful scene about accepting death and moving on. So Mr. Ramon, clears his mind and locks up the wold be deity. So during this time, the team is trying to figure out what is the evil speedster’s deal. As it turns out, Alchemy isn’t just a hypeman but Savitar himself? With consent from Albert and a mind reading device, everyone gets to talk to the big bad. Thus things get freaky, fast. He loathes Barry(future self) because he’s the reason why he’s trapped via the stone.

It’s clear that box has got to go. Jay lets everyone know that they can hurl it into the Speed Force. It would essentially be floating around aimlessly in space. Now, to do this both Flashes have to work together to in tandem. So following Garrick Barry is charged and tosses the box into the blue aura space. But as soon as he does so a shockwave knocks him back into a different time. Mr. Allen finds himself 5 months into the future and it’s not fun. Here he witnesses himself watching Savitar kill Iris. He eventually gets pulled into the present by Jay. 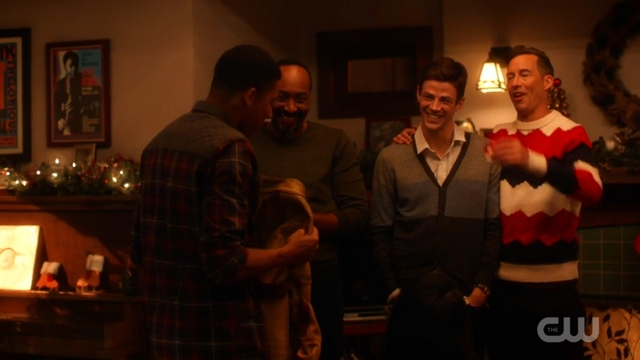 Barry is clearly distraught as to what he saw. He’s never traveled into the future but as it’s pointed out that’s dangerous. Garrick tries to ease the younger Flash’s mind that what he saw could be one possibility out of many. If I’ve learned one thing about this show since season 1, it has no problem kicking the hero when he’s down. But hey, it’s Christmas and it’s pointless to worry about hypotheticals.

Everyone enjoys the holiday at the West house as per usual. HR is quite drunk, Cait and Cisco have a nice chat, Joe and Cecil (Danielle Nicolet) kiss(finally). The fun doesn’t end there, Wally gets his Kid Flash suit as a present — best Christmas gift ever? Julian even stops by to join in the holiday cheer. Oh, and he helped Barry get his job back. Our episode ends with Barry giving Iris her gift; an apartment they both can call home.

What made this midseason finale stand out is the fact there’s more questions than answers. Who is Savitar? How does he get free again? Will Barry travel to the future again? Excuse the pun but only time will tell.