I know you can’t have your cake and eat it too, but sometimes you want it both ways! 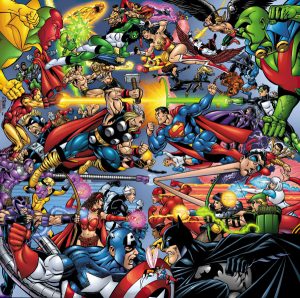 In recent days and weeks, I’ve discovered that I like how both DC and Marvel handle their properties. For Marvel, they prefer to project an unified image of their properties, why their comics often try to align with the movies and designs for cartoons and games take inspiration for the MCU.

DC, on the other hand, has no problem with multiple interpretations of its characters running around while Oliver Queen on Arrow isn’t necessarily the same one from the comics. Why we’ll have an Ezra Miller Flash and a Grant Gustin one. Why there’s BvS Batman, LEGO Batman, Justice League Action Batman and Telltale Batman all kind of doing there thing.