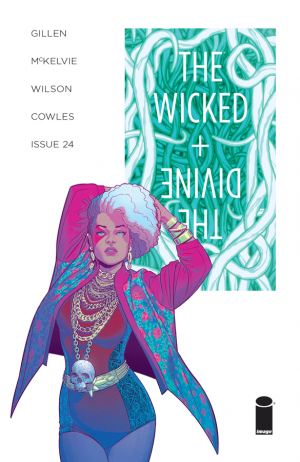 After last month’s special magazine issue, the “Imperial Phase “ arc is in full swing in WicDiv #24. And this issue should really be called “The Tragedy of Darth Persephone the Not So Wise” as she comes closer and closer to embracing her destiny as the Destroyer. Artist Jamie McKelvie gives her the best withering stares, and colorist Matthew Wilson adds a little extra blood red to her motorcycle and its speed lines to show that she really means business. Kieron Gillen’s plot for the issue begins with some New Year’s debauchery before switching to Persephone and the workaholic, not-the-partying type Urdr trying to get Woden locked up for helping build Ananke’s death machine last arc. But I don’t see him doing time at all especially after a fierce final page.

Each year is a cycle, and so is the Pantheon with each young god getting two years of power and immortality before meeting an untimely, usually exploding death. Gillen, McKelvie, and Wilson use this theme of cycles and the backdrop of the New Year to do callbacks to the relationships and events of the first five or six issues of WicDiv. For example, Persephone smokes a cigarette just like Luci and talks to Amaterasu about wanting to be like her when she attended her gig in WicDiv #1. Plus there’s the gorgeous firework display with the dead Pantheon members’ faces in the sky Return of the Jedi style that brings back memories of Luci and Inanna and a chance for Matthew Wilson to go all out with his colors. Except Persephone can’t really be bothered to care anymore as she doesn’t enjoy her divinity, treating a four-way with Baal, Sakhmet, and (surprise) Amaterasu as just another roadblock on her way to take vengeance on Woden.

Gillen eases us into the “Imperial Phase” arc with more conversation than action, but words and images can be just as powerful as exploding fingers or some super complicated doomsday machine. And Woden uses them both to while hiding beneath his geeky MRA/fuckboy veneer with badly timed puns about beheading Minerva and waxing rhapsodically about wanting a “phallic space laser”. His helmet isn’t just a bad Daft Punk cosplay, but records 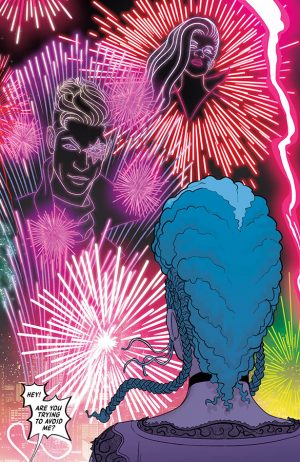 everything around him, including the fact that Persephone murdered Ananke and told the rest of the Pantheon to say it was self-defense. From his (and potentially the authorities’) POV, she looks like a stone cold killer, and far away angle used by McKelvie makes us feel like objective observers and lose some of our emotional connection to Persephone for a moment. And in her reaction to Woden’s blackmail, the lines between protagonist and antagonist are very blurred for Persephone.

A new arc almost means a new look for several of the gods unless you’re Urdr, who spends her days looking for the truth, investigating, and very rarely giving her fellow Norn members a coffee break. (There is one panel where McKelvie draws her touching her forehead regretfully like she wishes she spent more time with the other Pantheon members.) McKelvie gives Persephone a fierce mohawk/pompadour for her new hairstyle to go with her ripped abs and loads and loads of skulls. Her hair is out of her face, her symbol is streamlined, she’s put on some muscle, and is ready to become the Destroyer. Her laconic responses to her adoring fans outside the Pantheon’s quarters shows that her time as the fangirl Laura is a non-factor in her current personality. She’s all hard edges, loud motorcycles, and not prone to making idle threats.

And if she couldn’t get any more adorable, McKelvie gives Minerva a pair of pig tails instead of her old close cropped hairdo while keeping the goggles. And Gillen continues to write her as the only sane god in the Pantheon giving Persephone insightful relationship advice about how Baal hasn’t gotten over Inanna’s death, and he’s dating her because of their similarities. She wants Persephone to be a good, compassionate person and not the Destroyer, but my theory is that Mini (and the readers) will end up being disappointed.

WicDiv #24 puts Persephone on a path straight to the dark side through her words, actions, and even Matthew Wilson’s color palette. This issue combines indulgence and investigation beginning with a party and ending in yet another god on god duel.