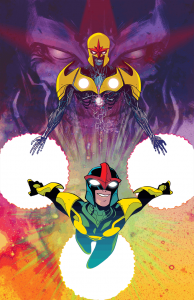 Nova #1 really reminded me a lot of the Ultimate Spider-Man comics where Peter Parker simultaneously navigated the perils of high school and supervillains. When he got good at one side of double life, the hammer would drop on the other side. Sam Alexander, the sole member of the Nova Corps, has a similar struggle as he deals with the alien Sidri infesting Ego the Living Planet with no problem, but can’t speak to the new girl in his class. Co-writer Jeff Loveness’ background as a comedy writer for Jimmy Kimmel definitely comes out in the comic with the quips he writes for Sam as well as his super nervousness at school.

One of the big selling points of Nova #1 was the triumphant return of Richard Rider as Nova. And Ramon Perez and Ian Herring make his big return visually glorious complete with rocket silhouettes and plenty of reds and purples. However, the manner of his return as shown at the beginning and the end of the issue is a bit hazy. Something is definitely wrong with him as he hallucinates (?) that his mom is an extra from Tales from the Crypt, and his first flight doesn’t go very well. (I am only mildly hooked by the purple tentacle thing that edges its way into the final page of the issue.) I felt like I was missing something in the Richard Rider scenes in Nova and then the editor’s note on the final page said he actually returned in a couple issues of the previous volume. Guess I’ll have to go on Marvel Unlimited and read them even though first issues should be, in my opinion, a little more new reader friendly.

The Sam Alexander scenes are really fun in Nova #1 even if the lines and insults thrown out about him quitting the Avengers and joining the Champions get old quickly. He has loads more confidence  beneath the Nova helmet than he does as Sam Alexander, high school student, and Loveness and Perez mirror this in their writing. While he’s fighting Ego the Living Planet, Sam make quips about Ego’s outrageous facial hair and sheer ridiculousness whereas he can barely say two words to the new girl in his class at school. This painful shyness is very relatable as Sam is hyper aware of everything he says and does around Lina. (He even forgets her name at one point in a mega faux pas.) 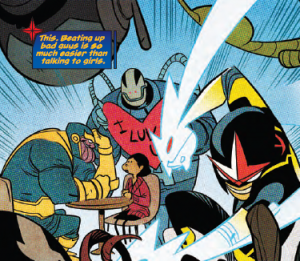 Ramon Perez is an inventive storyteller, who works in a variety of art styles, (See his lush watercolor work in All-New Hawkeye.) and one sequence in Nova #1 particularly stood out to me. It’s a two page cutaway sequence where Sam and Lina look like Peanuts characters, and Schulz-esque versions of various Marvel villain sarcastically taunt him about his inadequacies talking to women.  It’s a  singular moment of creativity and humor in a comic that reads like Green Lantern: The High School Years and an argument for a month of Peanuts style variant covers.

Even though Richard Rider’s return is underwhelming and confusing, Ian Herring’s space age color palette and Ramon Perez’s blend of cartooning and cosmic radiance in his artwork make Nova #1 worth a glimpse. Plus Sam Alexander is kind of adorkable with his inability to get his life together.