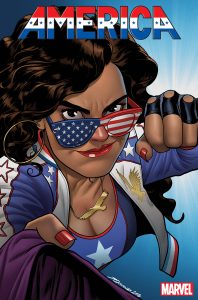 First and foremost, the long anticipated America #1 is a fucking awesome comic book. It makes you laugh, kicks your butt, and occasionally messes with your mind when the Ultimates and the much missed Prodigy discuss time travel and other dimensions. After building up a huge cult following through her appearances in Kieron Gillen and Jamie McKelvie’s Young Avengers and Al Ewing’s Ultimates, everyone’s favorite queer Latina dimension smasher America Chavez finally has her own solo book courtesy of YA novelist Gabby Rivera, artists Joe Quinones, Joe Rivera, and Paolo Rivera, and colorist Jose Villarrubia.

America #1 does a nice job of paying homage to the character’s past history with an extended guest appearance from The Ultimates and even a cameo from everyone’s favorite archer princess, Kate Bishop. But it also progresses her to a new unfamiliar environment: college. And she’s not chilling at Empire State University with Squirrel Girl, but in the hallowed halls of  Sotomayor University (Named after Sonia Sotomayor, the first Latina U.S. Supreme Court justice.) where there’s queer friendly Latina Fifth Element themed sororities. Also, developing some kind of time traveling device is a great class project idea, and you can get shot with fancy arrows during a lecture. Ms. America has always been a hit first and ask questions later kind of character so it’s cool to see her sharpening her mind to become a better superhero and also find a way to see her long lost moms again.

In addition to plumbing the depths of America Chavez and her use of snark to protect her feelings from being hurt, America #1 is a super colorful comic. Befitting its lead, Villarrubia uses plenty of blues and reds in all kinds of situations from the blue stars that America utilizes to travel between dimensions to the red sunset that she sees on her way to college. The unique red orange palette of the sunset scene marks a real transitional period in America’s live as she goes from living carefree in New York with her (sadly ex) girlfriend Lisa to the more regimented life at Sotomayor. Learning about ancient revolutionaries seems more interesting than Biology 101 though. 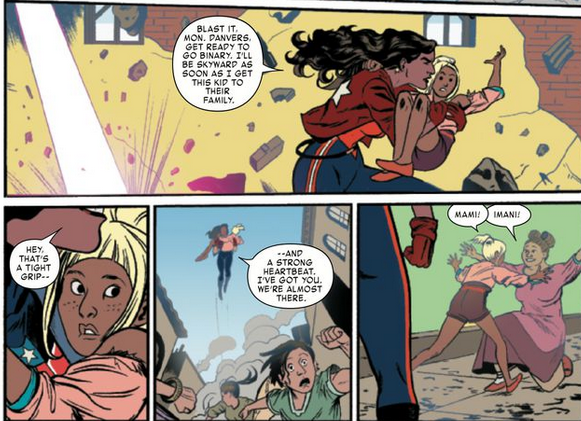 The father and son inker team of Joe Rivera and Paolo Rivera do an excellent job of embellishing Joe Quinone’s beautiful character and setting (Sotomayor University) designs and also adding extra pin pricks of emotion to each page. For example, they use tighter inks when America drops into action or is trying to repress or deflect something. But their style softens when she thinks about her moms or when Lisa tells her that she’s not following America to college. This comes as areal bummer because Gabby Rivera and Quinones create some real romantic sparks between them through touch and flirty dialogue about America being late yet again for diner milkshakes. It does allow America comes to terms with her place in the world on her own, and they do leave their relationship a little open ended with a panel of Lisa saying she still loves America.

To go along with its strengths in character development, art, and colors, America #1 is pretty damn funny, especially the beginning and the mind exploding ending. Gabby Rivera and Quinones uses the classic nine panel grid to fire off some quick one-liners from various superheroes and other sundry beings about who America is. The best line is when a random “cool” couple says that she’s better than The Cure and MCR. That’s up for debate, but there’s truth in the joke because America is one of  Marvel’s more stylish and hard hitting comics.

America #1 definitely lives up to the hype as Gabby Rivera, Joe Quinones, Joe Rivera, Paolo Rivera, and Jose Villarrubia create a powerful, yet occasionally lost and world weary heroine in America Chavez. There are punching, one-liners, and even some surprises too, and you should check it out.