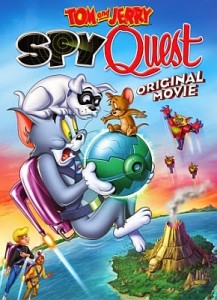 Tom and Jerry set out on one of their biggest, boldest adventures yet in ‘Tom and Jerry: Spy Quest’. Get set for intrigue, thrills, suspense, and high-action as the animated duo get wrapped up in a top secret, spy-tacular, fun-filled mission the whole family can enjoy together. It’s just another day at the beach for the dueling Tom and Jerry … that is until they bump into world-class junior spies Jonny Quest, Hadji, and their canine companion Bandit. When longtime Quest family nemesis Dr. Zin discovers that Jonny’s father, Dr. Benton Quest, has a device to solve the world’s energy problems, he sends his evil cat army to steal it and capture him and his bodyguard, Race Bannon. Jonny and his new furry friends set out on an action-packed quest to find his father and save the world from the malicious Dr. Zin.

The concept of Tom and Jerry teaming up with Jonny Quest just seemed too insane for me not to be interested in it. On paper, neither concept really loans themselves to jumping into the other’s world, and by the end of this movie… I’m not quite sure they made it work. With that said, let’s get to the review.

1. The Voices – I guess this is expected, Jonny Quest originally aired in the 1960s, so it makes sense that many of the voice-cast wouldn’t be able to reprise their role 50 years later. But the voices don’t even sound close to the original. Granted, it could be my memory playing tricks on me since I hadn’t seen the show in like 20-some odd years…

2. The Original Jonny Quest – This one baffled me before I saw the movie, but I thought it was strange that they went with the original Jonny Quest look and characterization. Like noted above, the first show aired in the mid-1960s! Who are you looking to get by reverting back to that style over the more recent 90s iteration of the franchise? While it makes no-sense from the outside, it makes sense in the context of the movie, as described in the following point.

3. Cartoony-Cartoons – I love Avatar: The Last Airbender/Legend of Korra, I dig most of the animated stuff DC does and promote, and Nick’s Ninja Turtles, but at the same time it is refreshing to see an animated special that embraces its cartoony roots. I’m talking exaggerated reactions, goofy and delayed animations, loud sound effects and the works. And this special does it in spades. That’s the reason needed the classic Jonny Quest brand as it is no where near as grounded as the most recent versions.

4. Cartoon-Logic Defied – This is one of those things that we just go with, I guess. But the same way it is strange that Goofy is a humanoid who can speak, but Pluto is a straight-up dog. It’s weird that Tom is a silent star in this film aside from some random screams here and there, but they are paired against three evil cats who all speak and have distinct personalities. It is just strange to watch them interact.

5. Not All Things are Excused – Speaking of the cats and the ancient Johnny Quest-style… there are some things that are better left to the 60s. The villain, Dr. Zin, is one of those creations that were probably better suited for a long ago time. While his antics are toned down, they’re a little uneasy at times. I guess it could have been worse. 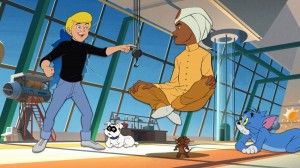 6. The Production – I already noted how nice the animation is in this film, but the entire production is pretty top of the line. From including classic music from both Johnny Quest and Tom and Jerry to a fun take on the opening sequence. It takes the original Jonny Quest opening and splices in random scenes of Tom and Jerry in the battle or running from danger. A really fun throwback that I enjoyed.

7. The Story – It’s pretty much a Bond plot, but it’s handled so well. And truthfully who doesn’t wanna see a flying volcanic base? Laser grids, deadly crabs and all sorts of craziness.