“Barb Wire”, “The Spirit”, and “Bob’s Burgers” all kick off with their first issues while “X-O Manowar” finally ties the knot  – all in this week’s reviews from Dark Horse, Dynamite, and Valiant Comics. 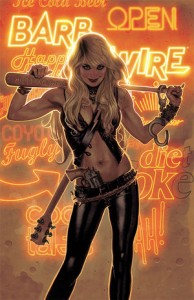 I only knew 2 things about the property going in: 1) the poorly received Pamela Anderson film adaptation and 2) that it was a 90s comic book series. Given the explosion of 90s nostalgia as of late it’s seems like a no-brainer to revive the franchise. I was expecting to find a gratuitous babes and bullets story here but Barb is no bimbo. She’s is a tough bounty hunter reality star (like Dog the Bounty Hunter but with less hair extensions) who keeps her bar afloat by catching perps. Meanwhile, she has to deal with BS from all sides, whether from her creepy landlord or from gang members eager to break a tenuous truce.

This first issue establishes a unique cast and the jokes land as hard as the punches. There’s some good storytelling here while the art team keeps the action coherent and fun to look at. We don’t get very far here but this #1 kept my interest enough to see where this reboot is going. 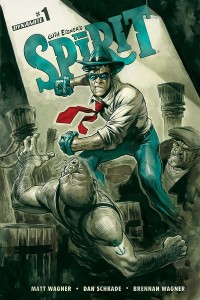 Denny Colt aka The Spirit has been MIA for nearly 2 years. While his closest friends have had no choice but to move on with their lives, his old partner decides to find out what happened to the legendary crime-fighter once and for all.

I love the Eric Powell cover – he really knows how to draw beatdowns. Wagner is a worthy candidate for the character, especially given the decision to keep The Spirit in his appropriate time period. However, this story felt more like a #0 issue to me than a number one. This entry is very light and while I didn’t want a dark and gritty reboot, I would’ve liked a bit more weight to this one. I would’ve also preferred if Wagner drew this one, as the art was a little too cartoony for me. 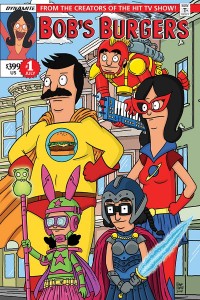 Following their fantastic 5-issue run, the Belcher family have made Dynamite their new home for an ongoing series. Tina gets cloned, Bob designs a food truck, Louise explores a secret tunnel underneath the restaurant, Linda tries to take a family photo in front of the eatery, and Gene becomes a crooner.

That mini-run was one of the best tie-ins I’ve ever read as it created a different (but no less hilarious) experience than the show by giving each member of the main cast their own segments rather than regurgitating episodes. I recognized a lot of the artists and writers names from those 5 issues, which is a good sign. However, this entry is a little uneven. Bob and Linda’s segments are both single-paged sight gags and I found Tina to look strangely off-model throughout the issue. That said, Tina and Louise’s stories are the highlights and pack in a surprising amount of the supporting cast. This inaugural issue is a rocky start but their mini-run took a few issues to really hit its stride too. 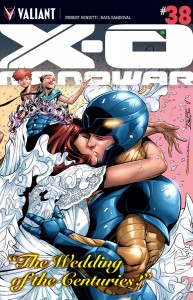 After leading an army of Armor Wearers to neutralize the Dead Hand threat last issue, Aric of Dacia decides to make Lady Sanaa his queen. Being the honorable man that he is, Aric seeks out parapsychologist Dr. Mirage to ask his long dead ex-wife for her blessing. So begins this sincerely tender issue, which takes us from proposal to ceremony (and even highlights the bachelor party), with a variety of writers and artists in tow. Dr. Mirage is the first of many cameos, although unfortunately that smiling Bloodshot on the cover is nowhere to be seen (probably for the best because he’s a real bummer).

I’ve been waiting on this issue for months and it exceeded my expectations. Most of the scenes take place in daylight and the art appropriately reflects this bright tone (this is a wedding issue after all). This issue isn’t just a celebration of Aric and Sanaa’s regal romance but of the Valiant universe at large. There are cameos galore and every character shines. Overall, it’s appropriately touching without being schmaltzy. OH BUT WE’RE NOT DONE – the wedding is only the first story. There are additional segments: Lady Sanaa recounts her struggles as a slave, Aric’s sentient alien armor has a lighthearted adventure doing during the ceremony, and more. Others have had more action or been more serious but this was my favorite Valiant issue of the year. It left me feeling all warm and fuzzy, which is a rare thing. As Colonel Capshaw said, “Congratulations, you lucky bastard.”