Wii U Experience Impressions and Thoughts


Nintendo has started doing what they are calling “Wii U Experience” to get the Wii U into the hands of some of their biggest fans. These events, at least the one in New York, are invites sent to Club Nintendo members and various members of retail. The event currently being held in the heart of the city, gives various groups about 2 hours to mess around with the Wii U and various experiences. Here are my thoughts on what I tried out and the general show. 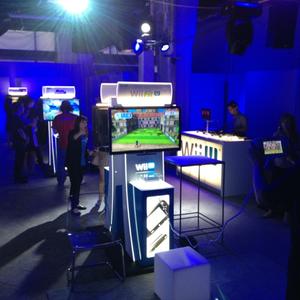 The first thing of course if the Wii U GamePad, the center piece of the new console. I know its been stated by almost everyone who has had a chance to play with it, but the device is extremely light. I say that, but you really won’t know how light it is until the first time you hold it in your hands. The controller is also extremely comfortable. The system has several places for your hands/fingers to rest while holding it including a cradle near the triggers and groves near the bottom of the controller to make it comfortable to hold. Also is a nice resting place when using the controller in different orientation.

The button layout was fine. The buttons felt solid and responsive, and the same could be said of the touch-screen. While I didn’t test out any game that used the touch screen in an extremely intenseÂ environment, and may not hold up under those circumstances.

I also got a chance to check out the new Classic Controller. It was a solidly made. The layout wasn’t so bad, but only got to try it out with Rayman Legends, which isn’t the most button-heavy game in the world. I’ll be honest with you, I really don’t know how to explain controllers. It works. It didn’t feel cheap and was very comfortable.

Now the real meat and potatoes though, was of course the Wii U games on display. Just Dance 4, Sing, Batman: Arkham City, Ninja Gaiden 3: Razor’s Edge, ZombiU, Project P-100, Pikmin 3, Rayman Legends, Game and Wario, NintendoLand and New Super Mario Bros U were the games on display. I saw some signs for Panamora View, but didn’t actually see the game on display. Due to time constrains and lines, I was only able to check out Just Dance 4, NintendoLand, Rayman Legends and new Super Mario Bros U. I saw folks trying out ZombiU, Project P-100 and Game and Wario so will share those thoughts first.

ZombiU was the title that most intrigued me coming out of E3, and was sad didn’t get a chance to get hands on with either single player or competitive mode. But from what I saw, it looks like a fun and tense game. Granted, it is really hard to get the true horror feel in an environment with bright lights and a speaker system, I guess.

Next was Project P-100, which I stood in line for like 10 mins to try, but found out the show was going to close and wouldn’t be able to get my hands on. The game looks like a ton of fun, but also extremely chaotic open close. Granted, you do control the unit as one, but as an on-looker it does look like a busy game. The person who was on the demo was also having some problems working with the touch-screen controls, but really wish got a chance to get my hands on it.

Game & Wario is an interesting title for many reasons. First, it seems like Nintendo is doing their best to hide the game. It was only revealed at e3 on their press site, at least Project P-100 got its debut on TV! Second, it seems to be using the controller in a lot of interesting ways, which isn’t surprising. The WarioWare series has always seemed like Nintendo’s best hidden tech demos. Showing off the capabilities of their newest ideas, whether it is touch screen, rumble or motion controls. The one game that really caught my eyes was using the Wii U Game Pad as a way to examine your environment in like 360 view to locate someone hidden in a house. With different windows/areas being show on the controller as you moved about. This seems like a game to look out for, may be a dark horse in the Wii U’s line-up.

Tomorrow, I will post the second half of the article detailing my hands on time with games on display, but wanted to briefly touch on the entire Wii U Experience. 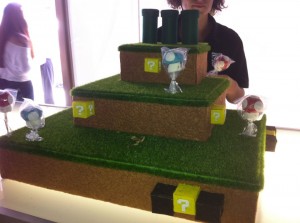 First, the event was really well organized with letting in guests in a timely manner. We were checked in and received badges which would allow us to access terminals located around the building to share photos and thoughts instantly to Facebook. Something, I didn’t really realize until I made it home. I think it was a smart idea to allow you to get the word out quicker, and maybe even get questions and thoughts from friends and family.

Second, the set-up was really nice with a central room that had a ton of games on display. Then smaller rooms off to the side, where you can get hands on with other experiences that needed a more trained expert. So stuff like Rayman Legends, ZombiU competitive mode, Just Dance 4 and the new Puppet mode and the likes. Nothing felt really crowded or cramp and even games back to back had decent amount of room for folks to line up for.

Thirdly, the atmosphere was fun and upbeat. It wasn’t overwhelming with any music or anything or I didn’t notice any. But you had a host of some sort, who held various contests throughout the event including a Co-op speed run in new Super Mario Bros U and a dance off in Just Dance 4. I didn’t partake in any, but there were prizes I was told. And it got folks to try out games they may have overlooked!

Finally, the general place was nice. Offered up booths to take photos with Nintendo-themed props and other goodies. There was a mini-snack area that had fruit kabobs, blue soda (think it was a lemonade), blue cotton candy and Wii U Experience water (spiked with Nintendo magic, no doubt!). On the way out, they offered you cake pops in the form of a Magic Mushroom, One-Up Mushroom or a Koopa shell.

All in all, the event was very well put together, and seemed like all attendees enjoyed their time there. On a geeky level, it was also nice to go to a Nintendo event since I got a ton of StreetPasses! I hope these events come to more markets, as the Wii U truly is a device you need to get your hands on to understand. With that said, I’ll be back tomorrow with my thoughts on the games I did play!