The Flash Season 4 Review: The Flash Reborn – Don’t Call It A Comeback 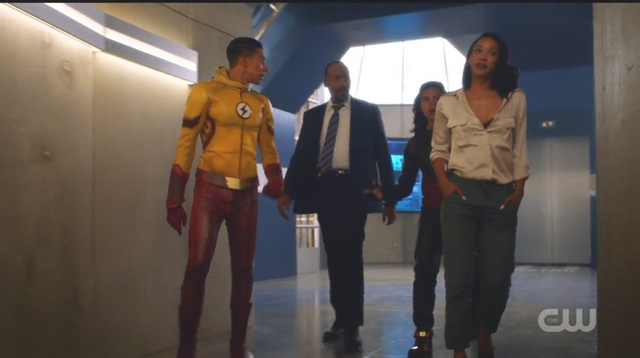 It has been a LONG six months Flash fans. Yet we have reached a new race that is Season 4 of the Flash on CW TV.  Will this season make us forget the mess that was season 3? Boy, I sure hope so. Spoiler warnings in effect and so the race starts up again

Our episode begins with Vibe (Carlos Valdes) and Kid Flash (Keyinan Lonsdale) being lead by the now team leader, Iris West (Candice Patton). The dynamic duo is hot on the heels of Peek-a-Boo (Britne Oldford). She’s someone we haven’t seen in since season 1.

This might seem out of place but my guess is that the Flash (Grant Gustin) missing has reached the attention of everyone. So criminals are out to play. Any who, she’s giving our boys a run for their money. She nearly escapes until Ms. West showcases he long overdue skills as team tactician to lead to Peek-a-Boo’s arrest.

Back at Star Labs, Iris is quick to greet KF and Vibe with back handed comments. To be fair, they nearly get shot. Their superheroing needs work. After Barry’s disappearance the team has been under Iris’ guidance. She is no slouch either, as she gives Wally and Cisco data to let them know that they are doing a sub-par job. So the slight mention that they may need a certain Mr. Allen doesn’t go over well. Iris has the staunch belief they are fine as is. — Logically, from her point of view he may never comeback and they have to make due. 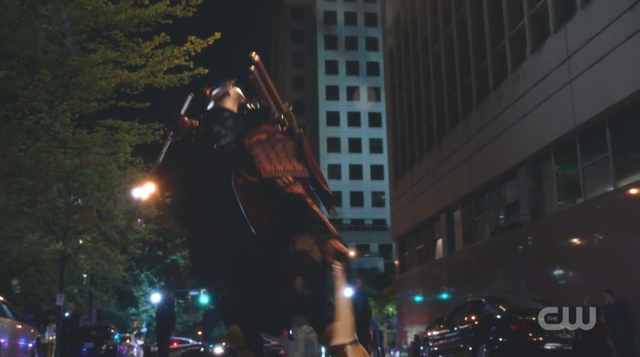 Back to their normal lives, Joe (Jessie L Martin) and Ceclie (Danielle Nicolet) are moving along well with their relationship. Again, I like to add, it’s good to see best dad in a relationship. Joe mentions that hiding Barry’s disappearance is proving difficult. I mean, how do you explain being gone for six months? How do you even have a job if you’re gone for that long? Any who, while on the Barry topic, Joe reminds Iris that they may need to accept he’s gone. Essentially, acknowledge it grieve and move on properly. Iris feels that there’s not much to do but stay in this odd rut. As she returns to their clearly expensive home, all things that remind her of Barry is hidden from view. Some may feel she’s being out of character but what reason do she have to believe he’s going to comeback? Thus she takes solace to their couch instead of their bed because the memories are too painful.

Things in Central City get weird when a nightly disturbance gets everyone’s attention. Vibe, Joe, KF and CCPD find themselves staring down an armored samurai. Before we can even ask why he makes a demand. He wants the Flash and makes it apparent he means Barry. Sorry Wallace! Our duo brushes off the demand and naturally taunt him. The warrior proves he’s serious after a display of power. With a strike of his sword he summons a shockwave that nearly destroys the city block and renders Team Flash useless. He offers them a 24 deadline to have the Flash appear before him. Of course he flies off in his jetpack. After 4 years of the The Flash this is still pretty darn weird! Yep, just another Tuesday in Central City! 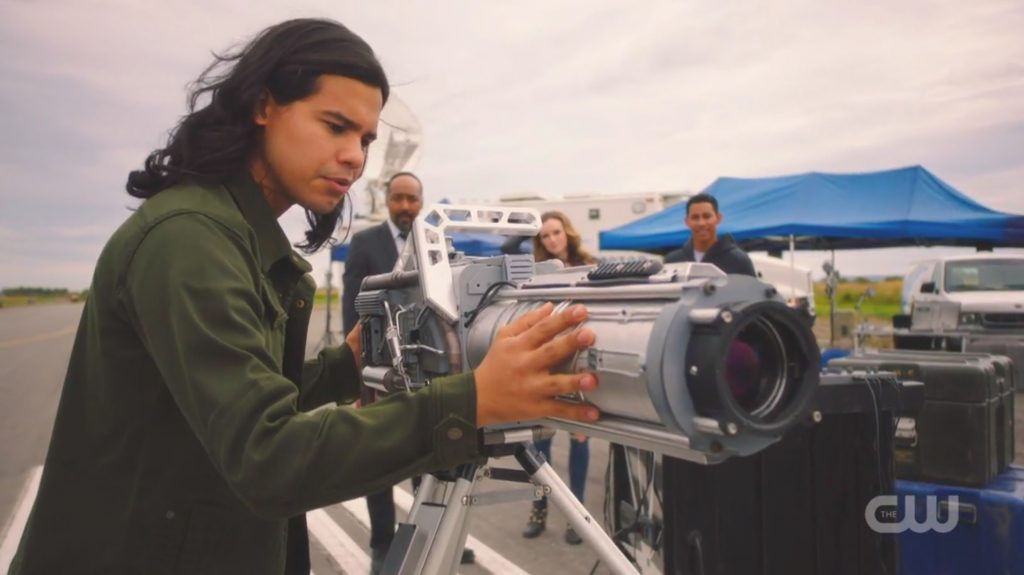 Back at hq and the painfully obvious reminder, Iris waves off the notion that they need Barry. Cisco however informs everyone since the end of season 3 he has been working on freeing him. Mr. Ramon is a genius on his own right but as we learned he worked with all the genius’ within the CW universe. I can’t think of a better stamp of approval. Ms. West however shutdowns the idea. If Barry is pulled from the Speed Force how do they know nothing will happen? Last time the whole city was nearly ripped apart. However, Cisco is never one to take no for an answer. Especially, when it comes to helping his best friend.

Later on, we follow the mechanical engineer to a random dive bar. Lo and behold Caitlin (Danielle Panabaker) is working here. Noticeably, she’s Cait and not Killer Frost. I guess we’ll visit at some later point. Cisco manages to charm his way into asking for her help with bringing Barry back. She gets on board without hardly any dispute. The whole team is nearly back before the way point of the episode — well that was fast (hah).

The team sans Iris, relocate themselves in a familiar testing site to save Barry. In some elaborate series of Ciscoisms, we learn Mr. Ramon retrofitted the speed cannon from season 3. So, the short version is that the speed force will be tricked into thinking Barry’s energy resides within it, thus he can escape. So after a wonderful show of special effects into our favorite sentient force of nature…we get nothing. It was a morale booster for a fleeting second. Back at Star Labs they and specifically Cisco is addressed by an irate Iris. Now, fans will feel that she seems really fixed on we don’t need Barry or that he’s practically dead. These feelings are legitimate and certainly warranted. Yet, they still feel out of character and forced for her.

As this is happening we see a dimensional rift open up and a familiar streak is on the move. In a little nod to Superman, a very naked Barry crashes into a truck out in farmland. Afterwards, in the middle of Iris express her disappointment with insubordination, Joe receives a call. Cecile over at the station reunites the team with our titular hero or whatever is left with him. 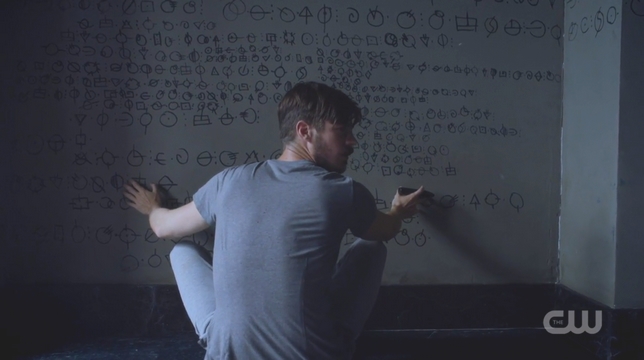 Grant Gustin gets rare chances to display his acting range admittedly. When he does, it’s often an interesting performance. Thus we have a Barry that is far from himself. He’s often rhyming, speaking of matters that make no sense whatever so. At least to us. We see that he is constantly writing in a language that’s unknown to anyone. Everything is cyclical as he recognizes his loved ones but continues his message. This is definitely not the Barry that we know. He’s both broken and interesting.

Cait summaries the following: The Speed Force is inter-dimensional force of time and space. So in stead of experience six months of time, he may in fact have been in there for a countless number of years. Like 1000 maybe? So his mind may have been affected by this experience. There’s the possibility he may not regain himself ever. Honestly, that’s a pretty raw deal for our hero. Granted he did mess with time but a sentence of 1000 years in dimensional prison is harsh. So, it’s no wonder that he make be speaking a brand new language. Barry’s mental state weighs heavily on everyone in their own way. Cisco confides in Cait stating that he rescued the dashing young hero for selfish reasons. He simply missed his friend and it’s really touching as well as sad. 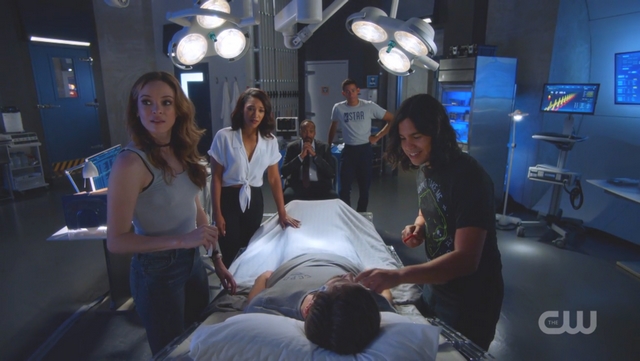 Iris on the other is still coming to grips with the present. Yes, she’s happy Barry is here but not like this. There’s a number of scenes where she speaks to him and he’s painfully distant. Again, the lights are on but no one is home. Asking these characters to make sense of the impossible often speaks to their unique strengths. How would we handle these circumstances?

My favorite moment is (surprise) a moment between Barry and Joe. Detective West is shown carefully shaving Barry. So this scene offers a number of themes and reflection. First, it’s Joe actively caring for his son and making sure he’s OK. The other is that strong paternal need to remind Barry he will always be there for him.

Following this moment, Iris visits the pipeline and best TV dad continues to live us to his name. Joe shares how a random visit to church reminded him of faith. Often we do what we do based on faith alone. Heroism, super or realistic exists on that simple principle as corny as that may sound. It’s the foundation of this entire character. Afterwards, the samurai’s 24 hour timeline reaches it’s end and he is ready to bring things down. However, he stops short of blowing things up because of Iris. She actually offers herself to ensure the Flash will show up. Our armored threat wonders what assurance she has. She bluntly admits that she has faith that he will save her. So he in response proceeds to capture her. I would like to point out the flip of her role from leader to damsel in distress is disappointing and a disservice to her character. I wonder what other direct danger could’ve been used instead. 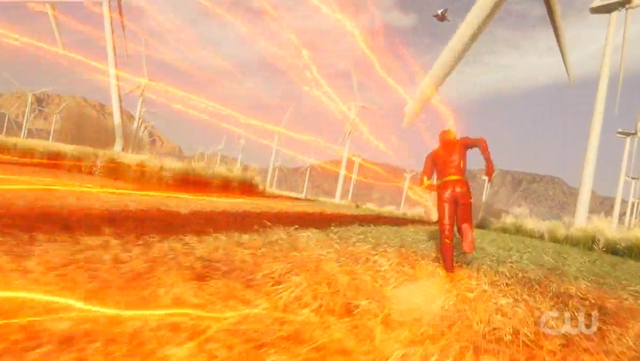 Joe heads back to Star Labs and in a last ditch effort tries to snap Barry out of it. As soon as Joe mentions she’s in danger it’s like a car engine is revving up. Barry’s eyes electrifies as speeds to her rescue. Along the way, he picks up his new suit. Which is brighter, lighter looking, and has gold lightning bolt trimming! As he dashes into action the team learns he’s a lot faster than he’s ever been. In a few minutes he saves the day and stops a lack luster foe. They removing the ronin’s mask to reveal he’s robotic? Um, huh that’s new.

After things quiet down, Barry addresses everyone and eases their worries. Also, he’s fastest man alive. Hah, no really. It’s taken 4 years to make it fact but he’s the fastest speedster and that’s thanks to being in the speedforce! He also feeling better about life and himself in general. This is more than likely the show adopting a more lighthearted vibe.  The last season was pretty dark and not all that great. So hey let’s the clean slate with a better mood for the show!

Our episode ends as we get to see the face of the Thinker. A mysterious man whom created the samurai and needs Barry for some grand scheme. I mean it wouldn’t be The Flash if there wasn’t a grand plan. The Flash is back with a relatively OK season premiere. 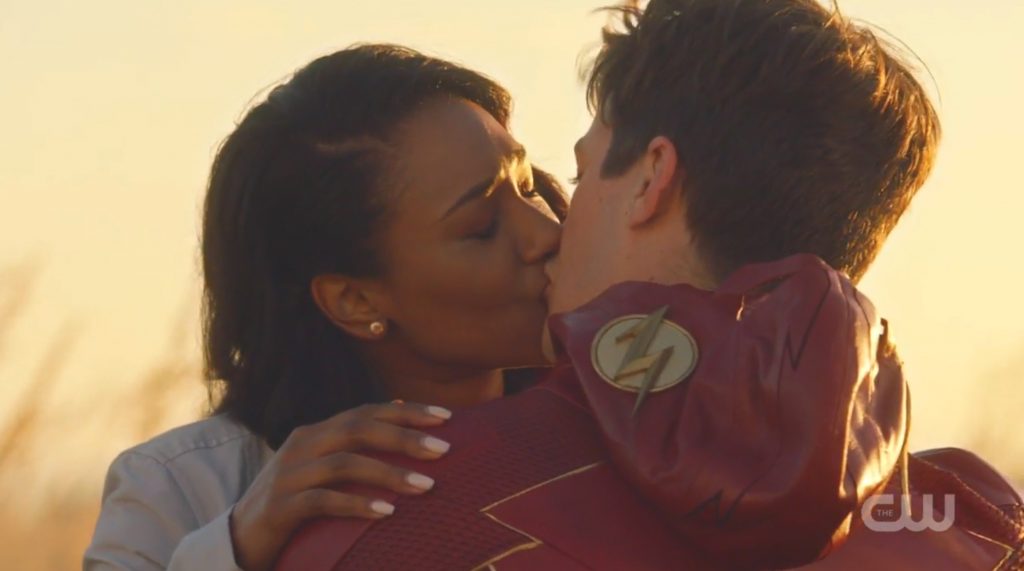 The premiere of season 4 of The Flash plays it pretty safe. The race is saved by seeing Grant Gustin play the part of a broken genius. Candice Patton's new role with the Team is long overdue and appreciated. Her being a damsel in distress for all but 5 minutes? Not much so appreciated. Here's hoping the season is better than the last year.