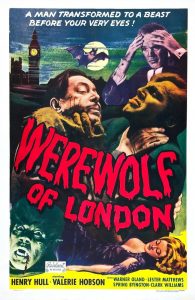 Forgive the pun, but Werewolf of London is a strange beast of a film. It preceded the much more well-known The Wolf Man by six years and established a fair amount of mythology that we now associate with werewolves in pop culture. Despite this, the film feels a bit uninspired when compared to its younger sibling, but it remains a fascinating oddity from the golden age of cinematic horror.

The film wastes little time getting to its lycanthropic action. An English botanist named Wilfred Glendon scours the mountains of Tibet in the hopes of finding the legendary mariphasa plant. Despite warnings of dangers lurking further up the mountain, Wilfred continues searching. He finds the plant, but is attacked and bitten by a werewolf, which then flees into the darkness. Wilfred heads home to London, surprisingly unfazed by the encounter (he did get his plant, after all!)

Wilfred meets several key characters upon returning home. His wife, Lisa, introduces him to her ex-boyfriend Paul, and the two men have the first of many passive-aggressive verbal exchanges with one another. Wilfred also meets a fellow botanist named Dr. Yogami (an Asian character played by the Swedish actor who portrayed detective Charlie Chan for years), who also serves as an exposition machine. Yogami explains to Wilfred the details of lycanthropy (or lycanthrophobia/werewolfery, as this movie calls it) – the horrible curse of the werewolf  that is spurred by the full moon and can only be diverted by using the mariphasa plant as an antidote. 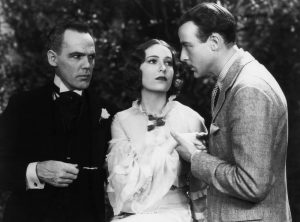 We find out soon enough that not only is Wilfred indeed a werewolf, but his supply of mariphasa plant bulbs is being secretly stolen by Yogami (now why in the world would he do that..?). Without a plant stem to stab himself with, Wilfred transforms into a werewolf and sets out into the night to look for victims – but not before stopping to put on his coat and hat! Wilfred finds a woman alone on the streets of London and promptly kills her, setting off a wave of panic across the city.

Wilfred’s surprisingly prolific werewolf rampage is occasionally interrupted by bumbling policemen, drunken landlords, and more passive-aggressive encounters with Lisa and her emotional friend, Paul. Wilfred tries his hardest to to keep himself far away from Lisa (we learn earlier that the werewolf “instinctively seeks to kill the thing it loves best”), but his killing spree continues, and he eventually stumbles upon Lisa and Paul while he is in werewolf form. Fortunately for the human characters, apparently all it takes to dispatch a werewolf is a swift swing of a stick. The werewolf is knocked unconscious, and Lisa and Paul escape. 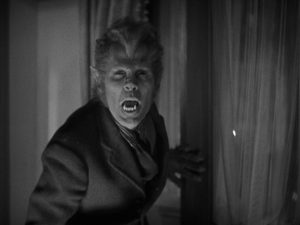 Paul recognized the werewolf as Wilfred and, with the assistance of the police, barricades Lisa in her home, waiting for Wilfred to return. Wilfred catches Yogami in the act of cutting off a part of the mariphasa plant and conveniently turns into a werewolf on the spot so he can kill him – but not before discovering that Yogami was in fact the werewolf that attacked him at the beginning of the film. Enraged and still transformed, Wilfred returns to the Glendon manor where he attacks Paul and attempts to get to Lisa. One of the policemen standing guard shoots the werewolf, which transforms back into Wilfred long enough to say goodbye to his wife one last time.

Werewolf of London is a very entertaining film overall, despite tonal inconsistencies and an occasional lack of identity. Being Universal’s first crack at a werewolf movie, it feels more inspired by the likes of Paramount’s popular 1931 film adaptation of Dr. Jekyll and Mr. Hyde, with the protagonist’s aggression, stoked by societal pressure, represented metaphorically through his monstrous transformation. While Werewolf of London handles this aspect decently (Wilfred’s inability to deal with his wife’s independent nature is clearly a sticking point), the movie performed poorly in theaters, likely being seen as too derivative. 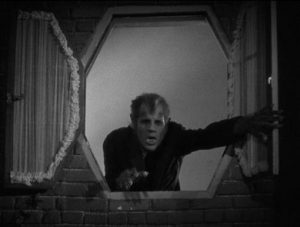 The makeup effects, provided by Jack P. Pierce (who also did effects for The Wolf Man) are pretty good, though the creature design leans a little more toward human than wolf. The extreme widow’s peak would go on to inspire such classic characters as Eddie Munster, so there’s that, at least! The film has a surprising amount of blood and “mature” content (the werewolf’s victims consist of swindlers, drunks, and adulterers),compared to other Universal monster movies, which might have also contributed to its poor reception at the time.

If you have the urge to watch a classic werewolf movie that does things a little differently, then I would recommend Werewolf of London. It’s quirky, decently-paced, occasionally embarrassing (just ignore all the old-timey racism!), and maybe even deceptively deep. It’s utterly lacking in the atmosphere that The Wolf Man is drenched in, but is still absolutely worth a look.

Fun Fact: Make-up artist Jack P. Pierce originally intended to use the werewolf design that was used for The Wolf Man for this film, but lead actor Henry Hull thought it would make him too unrecognizable.
Memorable Moment: I laughed for several full minutes after the werewolf stopped to patiently put on a coat and hat before heading outdoors. Even bloodthirsty manifestations of the duality of man don’t want to catch cold!