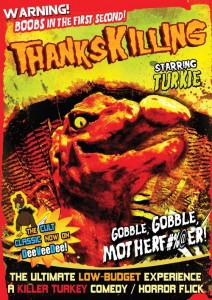 Let’s talk about bad movies. Generally speaking, I love ‘em, but it takes a lot more than simply being “bad” for me to enjoy poor filmmaking. That’s where things get complicated. Occasionally, a film can successfully emulate the most entertainingly inept qualities found in fun B-movies (e.g. Return of the Living Dead and Grindhouse), but for the most part I have found that sincerity is the most desirable quality in a great bad movie.

That brings us to the misguided dreck that is 2009’s ThanksKilling, which is the type of film that people who are aware of my unusual cinematic proclivities would recommend to me. On paper it has all the qualities you would expect to find in a hilariously bad movie, such as embarrassingly bad acting and over-the-top raunchiness, but sadly, it’s just plain eye-rolling-inducing badness. I’m all for cheesy holiday-themed “slasher” flicks, which there are a surprisingly large number of, but the gimmick just doesn’t work in this one.

ThanksKilling’s story is about a murderous supernatural turkey referred to as “Turkie” who was created in the 17th-century by a vengeful Native American shaman and tasked with indiscriminately murdering any white person it encounters. In the present day, Turkie is inadvertently awakened from his sleep when a dog randomly pees on a small totem pole in the woods. Free to return to his homicidal ways, Turkie targets a group of idiotic friends who happen to be camping nearby.

The bad acting by the group of friends (who I think are supposed to be college students, although they look about 20 years too old) is easily the most entertaining part of the movie. The actor who plays the lead male character, Johnny, is particularly wooden in a way that doesn’t seem to be entirely intentional, and most of the laughs I had while watching this atrocity were at the expense of his awkward, stilted delivery. 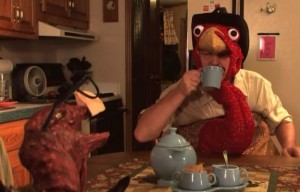 ThanksKilling goes out of its way to be consistently tasteless (as promised, you do get boobs in the first shot!), though its trashy content is not funny or even memorably shocking. It’s just… gross, and you’ll want to distance yourself from it. In particular, the scene in which Turkie rapes a girl is so completely out of left field that it’s difficult to tell exactly what the filmmakers were going for. I will admit however that I chuckled a bit at the part where Turkie tricks the female protagonist into thinking he is her father by literally wearing his severed face, but even that gag kills itself by going on for far too long..

Speaking of stale humor, Turkie’s gratingly bland voice and clichéd one-liners get old very quickly. I can only imagine that the filmmakers watched some of the latter Nightmare on Elm Street films (you know, the bad ones), and decided to rip off Freddy Krueger’s “[Insert generic insult here], bitch!” lines that had become embarrassing 20 years before ThanksKilling was released.

Fellow connoisseurs of bad film, please do not waste your time with this movie. Watch something that’s earnest in its intent and hilariously falls on its face like 2009’s Birdemic: Shock and Terror instead. Heck, I’d even recommend something as abysmal in quality as Piranha 3DD over ThanksKilling, because at least Ving Rhames’ scenes were genuinely hilarious. I’m just thankful that I can look forward to more entertaining garbage to watch for Christmas.
Rating: 2 (out of 7) – ThanksKilling is so bad that it’s… bad.