Have you felt that your life has been missing that fantastical element recently? Do you feel there aren’t enough men and women in color spandex patrolling your neighborhood? Well, the Brooklyn Superhero Supply Co. may have just what you need!

While out to lunch the other day with friends, one of them mentioned that they heard about this store that sold superhero gear. Of course, my ears instantly perked up at the thought, and we decided to check it out. I will say it was well-worth the trip, even if I’m not 100% sure how the store stays in business. 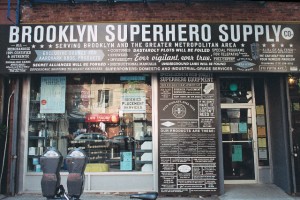 From the outside, the store appears fairly unassuming. There are a few signs to make you know you are in the right place, but it doesn’t necessarily shout superheroics! Step inside, and it is a slightly different story. While it isn’t a large store, it is filled with personality. 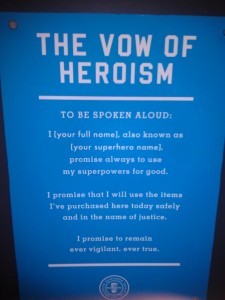 The first thing you notice when you enter the store is their fine selection of capes. Yes, they have capes in all sizes and colors. Green, red, blue, black, with or without hoods, and even some fringes. But it doesn’t end with the cape, the store also features an area they call the “Capery” in which you are able to test out your cape of choice. How does it work? There is a light source, to make sure you get the best possible picture, and also a fan that helps for that authentic cape in the wind look. It is a ton of fun, and friends and I had a blast taking pictures in this zone.

While the cape and name may make you think this is a store only for superheroes, you would be mistaken because the next thing that caught my eye was the Villain Station. Here, you are able to take a test (consisting of like 3-4 questions) that determines if you have the capability to be a villain. While I didn’t do it, I did get to see 4 people take the test, and results ranged from Cruel to just Annoying. It is a fun little test, and gives off a siren test when completed so no hiding your results from friends!

Before we get to the rest of the objects sold in the store, one final, and awesome touch, is it has a secret room hidden behind one of the store shelves. Open it up, and you discover that the store also doubles as a tutoring center for kids in the area. Not all heroes wear capes!

Going back to the store, the rest of the inventory is filled with things you need to fully convert. They sell bottles of Immortality, flight, sonar, time travel and many more powers. I think that was kind of cool, but there was never really anyÂ indicationÂ as to what you were actually being sold. A lot of it just felt like a bottle filled with sand, but who knows. The idea is cool, but it really needs to kick it up a notch with something practical… which I know is odd when it comes to talking super powers. 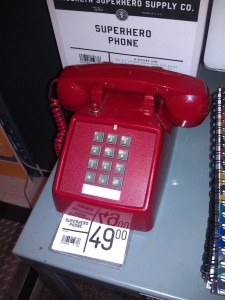 If you want to move beyond the powers, they do sell some practical gear. You can buy ropes/lassos, you can buy laser ray guns (don’t shoot actual lasers… I hope), robotic spider drones (for your spying needs), secret identity glasses (for when your friends are just THAT slow) and color change glasses, which were kind of cool. This stuff was a lot more interesting, and if wanted to put together a cool superhero costume for Halloween would be the place to shop. Also as a throwback to superhero history, the store features a red phone. For those who don’t know, it’s a replica of the phone used by Adam West/Burt Ward in the original Batman TV series from the 60s. And I WANT it so bad!

All in all, I thought the Brooklyn Superhero Supply Co. was a fun store to visit. There’s very little I would actually buy from the store, but I do love the idea and hope to visit again. And if you are ever in Brooklyn, it is really worth the trip!