“This is a work of fiction. Any similarity to actual persons,places, organizations etc. is purely coincidental” D4 says as you first load up the game, implying anything that could possibly emanate from the imagination of warped genius SWERY65 could possibly happen in this relatively dull existence. It’s that time again, where Access Games let’s SWERY loose and this time we have D4: Dark Dreams Don’t Die for Xbox One and now, PC courtesy of Playism. 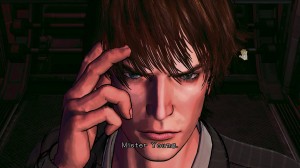 The second thing the game tells you, is that D4 is the story of a man who has a very strange fate, and it becomes very apparent very quickly that strange doesn’t even begin to describe it. You play as David Young, a private detective who can use various objects of power to travel back in time. His goal is to discover “D”, someone who can lead David to the answers to the case in which his precious wife was murdered. It all sounds tame when described like that, but very quickly you’re transported into a crazy world of time travel, mistaken identity, cat women, aviation trivia, and playing baseball with a mannequin leg in order to subdue criminals. Yeah, those things are in this game, and they don’t make sense, but that’s the distinct style that created a cult following around SWERY’s previous release, Deadly Premonition, and its here in spades. 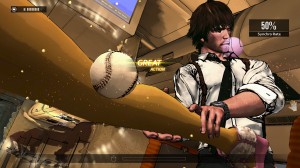 Much like the story then, the gameplay is pretty standard, except when it gets pretty weird, which is most of the time. It plays like a modern Telltale style adventure game, where you walk around and talk to other characters, but the similarity ends there. Everything is mouse controlled, and because of this, Kinect motion gestures translate to the PC version pretty well. You move David by pointing at specific areas where he can stand and clicking on them, from there you can pan the camera by moving the mouse to the edges of the screen, pick up in game currency find collectables, interact with objects or talk to characters by using left click to “grab”. Interacting with objects usually requires some kind of gesture to be performed with the mouse, be it a movement in one direction, a precision drag, or a click on an area of the screen. These gestures are used for pretty much doing everything for the first time, and successful completion of them uses stamina, and gives currency to spend on energy items or character costumes. These gestures sound repetitive and monotonous, but theyre easy to the point where they don’t get in the way, even eventually become something you do naturally; that is until the action scenes put your memory and reaction times to the test. Thats right, action scenes; the parts where D4 gets really crazy, and it’s true appeal shines through. The 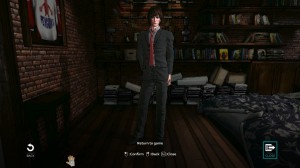 action scenes consist of QTEs that involve the same mouse gestures, but the goings on in the background are so over the top, and so imaginative, that you can’t help but love them; the action is so great, and what the game requires of you in these scenes is so easy, that you’re able to just enjoy what’s happening on screen. David can die, however, if you miss a QTE, you take damage and lose health, and losing it all results in a game over, but again, the game doesn’t require a lot of input, and health is easily replenishable, so it shouldn’t be an issue. The action scenes sum up what D4 does the best, its gameplay is minimal and repetitive, but you don’t mind because the story, albeit nonsensical right now, is wacky and loveable.

The only negatives I can level at D4 is that it’s short. Season 1 clocks in at 4 hours and it’s very disappointing to be yanked out of the nonsense that is D4’s world so quickly. There are plenty of collectable clothes, trivia pieces and side quests to keep you coming back, but ultimately those are just ancillary to the real reason why you’re there, and it’s such a shame that Season 1 wasn’t fleshed out any more than it was. It’s a reminder that outside of the alluring absurdity that is D4’s world, there’s something inescapably mundane.

Review 6 (out of 7): D4 is mad, simple, and above all fun. If you enjoy something that’s really weird, casual and just loves to refuse to be unlike anything else, D4 is the kind of game for you. It’s short but don’t let you put that off, because what’s here is very, very sweet.