Marooned time-travelers prepare to go home in “Past Aways”, a marooned extraterrestrial just tries to blend in in “Resident Alien”, and Quantum and Woody try not to die in “Quantum And Woody Must Die!” – all in this week’s reviews. 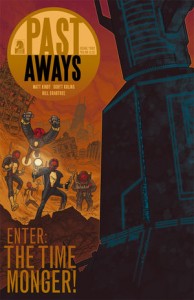 I really didn’t want to review another Kindt book. Not because I don’t like his writing – but good lord where does he find the time? This is the fourth MK title I’ve reviewed this month (I think somebody’s using Hermione’s Time-Turner). Also, I was hesitant to blindly jump into a second issue but the inside cover had – *cue fanfare* – a summary: when items from the future begin appearing in the present day, a group of stranded time travelers make plans to go back… to the future.

Cracking open the book I found it to be the same Matt I’m used to with a dare-I-say sunnier disposition. There’s the deep characterizations (most of the issue is spent profiling the cast), annotated panels, and I-never-would-have-thought-of-that sci-fi tech but, while his other titles present glimmers of humor, there’s an obvious playful tone here. For instance, super-duper high-tech gadgetry is highlighted and profiled in the margins, and about halfway through the issue a simple piece of luggage is profiled with fancy jargon. Okay, it’s not that funny when I write it out but it gave me a chuckle. Even the opening tour of a headquarters outfitted in tech from a far-flung future is light-hearted. Complimenting the tone is a clean and bright art style with some surprisingly detailed backgrounds. However, it’s not all sunshine and rainbows – this group of stranded time travelers is carrying a lot of baggage, from lost loved ones to intense grudges and there’s some palpable uncertainty if they’re up for the challenge of surviving a journey home. 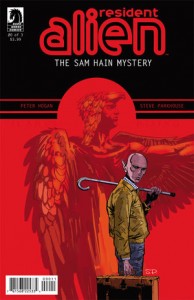 If the colon in the title wasn’t enough of a clue, this particular issue of “Resident Alien” kicks off a new volume – volume 3 and the first in a 4 part series to be exact. Our lead is a crash-landed extraterrestrial masquerading as Dr. Harry Vanderspeigle, who drives to Vegas to get some cash quick. The issue immediately sets up the stakes: having counterfeited bills up until now, Harry needs a new source of income so as to not arouse suspicion. And while he could easily sway luck his way on the roulette wheel or at the blackjack table with his limited alien powers, there’s still the danger of people asking too many questions. This aspect – “The Fugitive” meets “E.T.” – reeled me in instantly. Well that and the strong yet versatile art. The opening panels show whizzing tail and headlights around Sin City, the Strip against a pitch black desert sky, and the purple hues of the casino floor. Later pages contrast this with cluttered apartments, government offices, and richly painted scenic views of a lake cabin. I didn’t see a colorist listed so if Parkhouse is indeed a one-man-show, bravo.

While the eponymous mystery isn’t exactly set up in this issue, our man from another world will have his hands full as Secret Service agents follow the faux money trail and his fellow aliens settle on a response for his crashed ship. This down to earth (no pun intended) story about an alien trying to pass for normal delivers a unique genre mash-up with a tone and feel all its own. 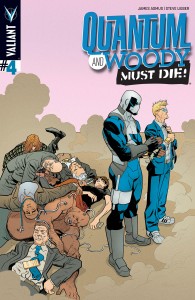 Quantum and Woody Must Die #4

Having been busy with quite literally every other Valiant series I was only vaguely familiar with the super-powered foster brothers. However, after glancing through the first few pages of this issue I quickly caught up on #1-3 to not miss a single joke. If you’re a Q&W virgin as well all you need to know is that our heroes have pissed off a lot of people who are now out for blood. Also their adoptive father has his mind in the body of a pregnant goat.

The opening pages see the team face off against a dynamite vest-wearing sloth but after last issue saw Woody (under hypnotic suggestion) obliterate a panda, a crowd of angry animal lovers confront the duo with unfriendly images (like a guillotine and a bucket of tar paired with feathers) in their word balloons. What follows is more shenanigans that tie up loose ends, but also a reflection on Woody’s antics. Where most comics would give the lovable ne’er-do-well a free pass, there’s a short contemplative moment that didn’t feel out of place or forced – a testament to Asmus’ command of his cast.

While the Valiant titles I’ve read range in humor (“Ivar, Timewalker” is a stand out), this brings some serious yuks (even though I think last issue was funnier). Even the way the art is sketched out lends itself to the humor. I can’t quite put my finger on it but it just looks funny. And as if Lanphear’s emoji-like images in the word balloons weren’t enough, he contributes dynamic letters that shrivel and grow depending on the gag.  This final issue was hefty – every balloon brought a laugh or plot point and culminated in one hell of an epilogue. When will Quantum & Woody return? I hope soon.