Superman has become a bit more super. In his most recent adventure, Superman developed a new power which has been dubbed his “Super flare.” While it is a great power, it also leaves him “human” for about 24 hours. The previous issue examined his new found humanity through the eyes of another human with Jimmy Olsen. Now we get to see the results and actions with his super-friends. 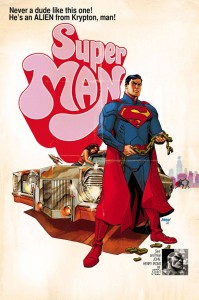 I will be honest, it makes for a damn fine issue. It’s like the Justice League gets to haze the new guy, but in a superheroic manner. We see Batman and Cyborg trying to test his invulnerability. We get to see Wonder Woman punch him as hard as possible. We get to watch as the League puts him through the very strenuous and not-completely made up, “JL 1-1a.” And after that was all done, and he tested that his powers do return to roughly the same level.

We then got to see Superman experiment with purposely triggering his super-flare. And it was fascinating. First to see the destruction it caused which was pretty massive even in a controlled environment. Secondly, and more important to me, it was an interesting twist to see Superman experiment with his powers as an adult. Most forms of Superman’s origins has his powers manifesting in his youth/teenage years and the troubles that come with. But here, not only is he more in control of his powers, but he has a team of heroes who are better-equipped to help him test them out.

More than his training and hazing, it was great to see the Justice League as friends. It doesn’t always happen, and really it shouldn’t happen too often in their own titles, but it was refreshing. One of the criticisms of the New 52 has been that sometimes the heroes don’t seem to care to be heroes, but here we get them embracing it and the silly nature of their struggle.

We have a light-hearted Batman who is actually cracking jokes with Superman! We have Cyborg, The Flash and Aquaman going along with a super-sized rib. We have Aquaman trying to be chivalrous and avert Wonder Woman’s eyes from Superman.. I was a bit confused by that panel as I assume most of the League knows they are dating, but whatever.

But that all pales in comparison to the Justice League going out for drinks together in their civvies. And Superman, who I imagine much like the Flash has a high metabolism, is still very much human after his last super-flare experiment gets wasted. And the fall-out from that is just terrific. And done so much more tastefully than that scene in Superman 3! 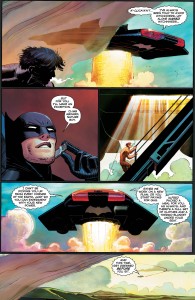 The end of the issue was a bit of a whiplash. Dealing with a hungover and somewhat still weak Superman taking out a random threat. I’m not sure if more will come from that since they were attacking LexCorp with fancy high-tech weapons. More importantly though, it ends with a twist that leads into… Divergence so check it out this Saturday during Free Comic Book Day!

The art in the book was a bit rough for my liking. I felt like the characters weren’t as fleshed out and detailed as we typically get in the Justice League books. There’s a panel that is supposed to be this issue’s “money-shot” really falls flat because of the appearance of Superman, and the “Duplicate” image loses something in its definition. That said, the art doesn’t hold back the issue.

Review 7 (Out of 7) – A really fun issue. While it builds on elements from the previous arc, it is also a pretty simple one and done story that passes the baton to the next arc in the Superman series.