Over the course of its history, DC Comics’ playbook has included reboots, relaunches, resets, rewinds, refreshes and of course everyone’s favorite retcons. So while DC Rebirth could be seen as another Hail Mary gimmick from comics’ oldest publisher, we want to believe the company intends to do right by their fans, creators and most importantly characters.

Let’s dive into DC Universe Rebirth #1 and see what this “Rebirth” holds for the company.

1. A Tale of Four Artists – I’ve said before with DC’s weekly books that the rotating chair of artists often times throw me off because styles can vary and clash so much week to week. That problem is usually amplified when there is a rotating set of artist in a single book, but DC Universe Rebirth wisely navigates around the potential problem with its narrative structure. While one artist is tasked with the “framing” of the comic through its central character, the others are allowed to draw little interludes into the lives of DC Characters so that we’re able to see snippets of what the future may hold for them.

That said the star of the book had to be the facial expression. I’ll try to avoid spoilers as best I can, but there are some potential emotional reconnections where the artist zooms in on faces and you can see the pain and confusion and somewhat shock and it resonates so strongly with the reader. One scene in particular even know what would happen still had me on the edge of my seat, was that recognition in their eyes? 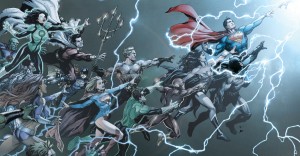 2. Lost and Found – The main crux of the book isn’t action or Earth-destroying threats, there’s no real villain nor hero. Instead it’s a story of finding yourself again. Finding that last piece of hope to hold onto to make you whole again. The book in some ways could be seen as a story of depression. That feeling of hopelessness you get when nothing is able to bring you back, and just when you think all hope is lost and you accept your fate, you latch on to something and in that moment you believe that anything can happen. And for our sake, let’s hope this is a new page for the DC Universe.

3. Life, Love and Legacy – The action driving the plot forward is the lack of action. Instead, we get something that has sorely been missing in DC Comics in recent years, heroes with down time. But it’s not just them having dinner, but give the main character and the audience a chance to reflect on what has been missing in these past 5 years. Perhaps, it was the legacy of certain characters like the Blue Beetle and the Atom. Maybe you missed the romance like Oliver and Dinah or even evolution in relationships. Maybe, we took for granted the heroes we had until they were gone. Were they really that bad to us?

Smartly, the book doesn’t look to answer these questions. It doesn’t handwave away the things it knows it is missing, it simply asks us to acknowledge it and to know the creative teams acknowledge it. Where this all goes is anyone’s guess but for the first-time in a long-time, I think most fans will be along for the ride.

4. Mysteries of the DC Universe – We’ll get to the BIG one in just a second, but this book does offer up some talking points for the future of the line. We finally learn the answer to Batman’s question about The Joker’s identity and no one is entirely sure what to make of it. I’m curious to see if they play that specific revelation straight or are there more twists and turns along the way? We learn of Wonder Woman’s family secret and what does that mean for the future. Will she discover a new ally or foe? The Atom is sent on a question to rescue the original. There may be than meets the eye when it comes to Blue Beetle’s scarab and so much more. There’s an excitement at the end of this book for what’s to come and I can’t wait. 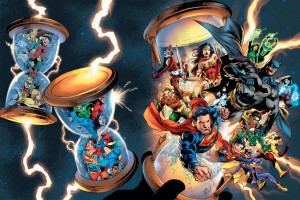 5. Flashpoint Redux – We revisit, ever so briefly, two aspects from the Flashpoint storyline. The first is the letter that Bruce receives from his father in the alternate timeline which leads Bruce along the path that will eventually lead to the big confrontation, I imagine. The second is we run into Pandora, who is kind of offed unceremoniously, but it doesn’t seem without merit. While to many she represented “The New 52” she was also the heroes only connection to the truth, and shall be fun to see them start from square-one and piece it all together.

6. Who Watches… – The final twist… the big revelation of this book has already had the comic world abuzz with chatter even before release, and if nothing else the entire thing intrigues me. A honest-to-goodness twist that I can’t predict how or when it will unfold. Will it become something major in all DC books going forward? Will it be something that only takes place in the background? Does it go quiet for years until we’re ready for a giant Event series? What is going on with it? A company-wide hook that isn’t death is so damn refreshing for comics, and I love it!

7. Out of Nowhere – One of the best things about DC Universe Rebirth doesn’t even take place in the book, well it kind of does. The simple fact that we got a genuine article one-shot book that is so impactful almost brings a tear to my eye. We’ve become so conditioned to these big event books that it was just so refreshing to see a book that set-up and resolved it’s main narrative with one title…

Review 7 (Out of 7) – I’ve said it before, I’m a fan of the New 52 and what it stood for so for me this book wasn’t as much an apology as it was a guideline for the exciting future course that has been plotted for the DC Universe. I’m stoked to see so many of the bread crumbs dropped in this book play out over the next few months and years.