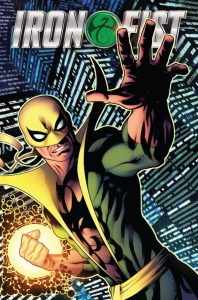 Artist Mike Perkins’ skill at drawing fluid, yet brutal action sequences during Ed Brubaker’s Captain America gets turned up to 11 in the fantastic new Iron Fist #1. He, writer Ed Brisson, and colorist Andy Troy show a Danny Rand, who still has stacks and stacks of cash, but has lost his connection to K’un-Lun, chi, and by extension, his Iron Fist abilities. He is traveling the world and looking for the perfect fight to rekindle his powers and give him renewed purpose in his life. Iron Fist has its fair share of brooding and grimness, but is filled to the brim with the kind of kung fu action that some fans wish there was more of in the recent Netflix show.

Brisson keeps his plotting pared down in Iron Fist #1 and structures the comic book like a gritty reboot of David Carradine’s Kung Fu with Danny Rand traveling the globe, getting in a fight, and then moving on. Perkins and Troy’s expertly crafted fights use all the tools of the comics medium, including intense reds when Danny finally meets an opponent who gives him a good fight, smaller panels when Danny uses a succession of quick martial arts moves (That are named on the page.), and speed lines as punches when the poor Bulgarian fight club don’t even see him coming. The art and layouts establish Danny Rand as a premiere martial artist, but Brisson’s narrative captions continue to show the meaninglessness of these fights. He’s not defending K’un-Lun or defeating anyone of consequence and has turned in the kung fu equivalent of Rocky at the end of Rocky V basically picking fights in the street.

These feelings show up in the close-ups of Danny’s face and the faded inking and coloring style that Mike Perkins and Andy Troy use every time he thinks back to K’un- Lun or his old life in Iron Fist #1. An early montage/backstory retelling kind of breaks the flow of the story early on, but Brisson, Perkins, and Troy immediately drop back into Danny’s life where he’s stuck on a plane listening to an old man jabber on about returning to Along with not being connected to chi, Danny has also lost his connection to humanity, doesn’t really have any friends, and rebuffs friendly conversation with a girl at a Vietnamese bar and his fellow plane passenger. However, that essential human bond returns later in the issue when he fights an opponent that isn’t a tomato can, then shares a drink, and begins a new martial arts journey with some gorgeous orange horizons from Perkins and Troy instead of shadows and negative space.

The premise of Ed Brisson, Mike Perkins, and Andy Troy’s Iron Fist is a basic mid-life crisis meets kung fu vision quest setup. However, Perkins’ ability to draw martial arts strikes, physical punishment, and emotional anguish, the power of Troy’s colors, and Brisson’s digging into Danny Rand’s tortured psyche makes it a must buy for new and old fans of the guy that touched a dragon’s heart and survived.