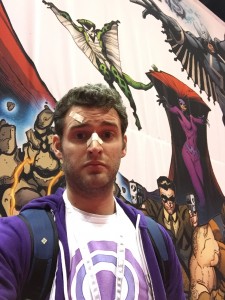 After such an exciting Day 1 at C2E2, I was really looking forward to Day 2. Saturday has a much different atmosphere; there are more people, more costumes, and so much more to do and see. For Day 2 I went as Hawkguy from Matt Fraction and David Aja’s incredible run with the character. I certainly was not as popular as I was the first day when I went as Spider-Man, but there were still a lot of compliments and photos taken. After going to a convention cosplaying, I don’t think I’ll ever not dress up again. It brings a whole new dynamic to the experience. There were so many more cosplays on Day 2 and it was such a wonderful sight. 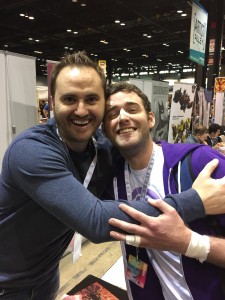 On Day 2 we started off in Artist Alley because I had to get a 5 minute sketch by Ryan Stegman on my blank Spider-Gwen #1 variant. He’s such a cool guy and I always enjoy seeing him at the cons. Some other 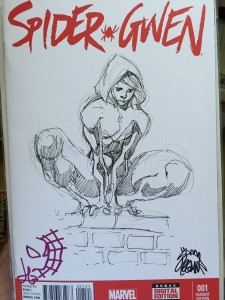 notable stops in Artist Alley were Jerome Opena and Charles Soule, who were both really great. I bought more artwork in Artist Alley this year than anything else combined. There are so many talented artists back there and I desperately needed their artwork to come home with me so I can show it off. 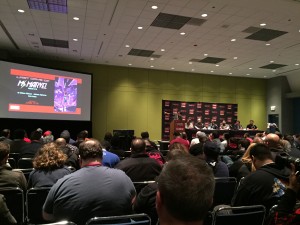 There were a few panels we hit: Marvel’s Secret Wars: Last Days, The Kick-Ass Women of S.H.I.E.L.D., and Marvel’s Next Big Thing. The only “news” out of the Last Days panel was from Dan Slott about Silver Surfer and how he doesn’t fit into any of the Secret Wars books because he’ll be out in space. And there was some talk of him using the power cosmic to recreate the universe. 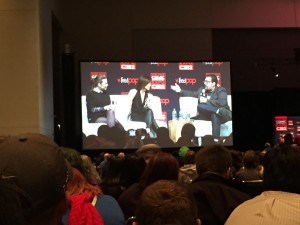 The Kick-Ass women panel was great, Hayley Atwell was so charming and Ming-Na Wen was hilarious. The majority of the panel was a Q&A and there were some really great questions about feminism, which Avenger their characters fancy, Hayley’s secret talent (go check it out on YouTube!), and what their preferred drinks are as well as their characters. The one question Hayley could not answer was about her role in Ant-Man and working with Peyton Reed. Hayley did say we should hear news in about 3 weeks of whether or not Agent Carter will be picked up for a second season. 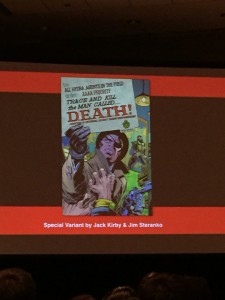 The Next Big Thing panel was a bit of a letdown because for a lot of it they just said “Everything Dies.” Marvel did however announce 5 one-shots for the 50th Anniversary of S.H.I.E.L.D. featuring Mockingbird, Quake, Nick Fury, Agent May, and Peggy Carter. Also for the 50th Anniversary they will be putting out a special variant by Jack Kirby and Jim Steranko! Chip Zdarsky was present on the Next Big Thing panel for his work on Howard the Duck. He brought a lot of humor to the panel and one of the running gags throughout the panel is that he is going to do a Star Wars: Jar Jar Binks One-Shot. Which I kind of would actually love to see.

At the end of the day we 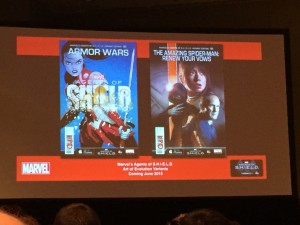 did the Marvel giveaway hour at their booth. Who doesn’t like free stuff? I got a variant cover for Mighty Avengers #10 this time, my brother and his friend got Dynamic Forces variants for Avengers/Invaders and Star Wars: Princess Leia which both look great. There was definitely a lot more energy at the Marvel booth on Saturday and a lot of cool things were given away. 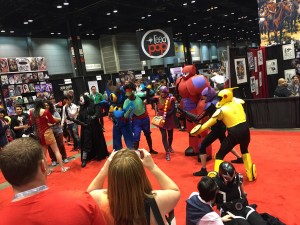 All in all it was an exhausting weekend, but I would do it again in a heartbeat. It’s going to be weird readjusting to life not in costume, surrounded by everything that I love. My friends and I had so much fun, met some great people, and found some amazing art. So thank you for an amazing weekend, C2E2. We will be back next year! Can’t wait!